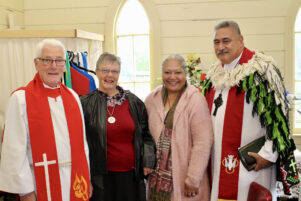 The Moderator is the elected spiritual head or leader of the Presbyterian Church in New Zealand.

Longstanding minister at the church Jim Veitch was there with wife Jan and church representatives from across the region. Congregation members past and present turned out for the celebrations in big numbers. One couple renewed their vows 64 years after marrying in that very place.

More than 150 attended the birthday party for the Jellicoe St landmark, named First Church because it really is Martinborough’s very first church.

McAnulty said he was grateful to have been invited to the celebration and said the congregation could take pride in what they achieved.

“During the celebration, I reflected on how when the settlers arrived in Martinborough and established the church, they wouldn’t have imagined that 150 years later, Martinborough would be recognised across the globe as a world-class wine producing region.

“I also reflected on the fact that while their first focus upon settling in Martinborough was to set up a church, my great-grandmother’s great-grandfather, Henry Burling, established Featherston and the first thing he did was build a pub – so slightly different priorities,”

He said while the numbers attending church was fewer these days, churches remained an integral part of our society.

“In a time of record construction and development the church buildings remain cherished for adding character to our towns and reminding us of that earlier time. The congregation can take pride in their role in preserving all of that.”

South Wairarapa District Council mayor Alex Beijen said history was important to any town, but to have the church that built the second building in Waihenga – the precursor to present-day Martinborough – still in existence was something to celebrate.

“During covid lockdown, we relied on many people to stand up and ensure the vulnerable in the community were contacted. First Church, among others, were crucial in this, showing they have an important role in our community,” he said.

The weekend started with a dinner on Saturday at Peppers Parehua Martinborough. There was a large service at the church on Sunday, where the vow renewal took place.

The couple, Leonie and Ian Couper, were married there in June 1967.

At the service, the congregation sung a hymn written for the occasion by organist Bob Bargh.

The church bell rang and a piper played at the end of the service. The weekend events wound up with lunch for almost 100 in Martinborough Town Hall.

Described as ‘a terrific weekend’ by attendees, people enjoyed discussing memories of the church and community with friends as well as planning for the future.

The church was built in 1871, near the present site, with the first service held that June.

Regular services are held every Sunday.

Martinborough historian Mate Higginson said the church was built from timber milled at nearby Moiki. The construction cost about £141. It had three rows of pews, one of which is in the present-day Martinborough museum. The current church building opened in 1891 on its present site, with the original building at the rear.