An innovative project in South Wairarapa means Ata Rangi Vineyard and Winery can manage the supply, storage and consumption of its power instead of just waiting for the monthly power bill.

The winery, along with three households and Douglas Park School in Masterton, form a virtual power plant, the latest innovation project from Genesis Energy. Workers installing solar panels at Ata Rangi Vineyard and Winery, before [top] and after [below].

Power is collected from the 138 solar panels attached to the roof of the winery and cellar buildings with surplus power stored in a dedicated battery.

Ata Rangi head winemaker Helen Masters said that it all started two years ago when they installed solar panels as part of the Genesis local energy project.

The power generated on site made a significant dent in their power costs.

The winery can manage power use and use stored power at the lower rate.

“It’s power you can tap into,” Masters said. 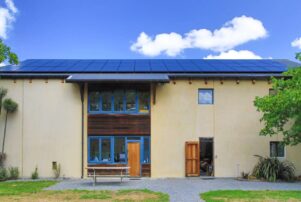 Software monitoring programmes developed by Christchurch-based technology start-up Karit means power levels can be monitored remotely or on site and power either aggregated between the five sites or released back into the Genesis grid.

It’s the latest in a series of energy innovations at the winery, a few years ago they reviewed diesel use across the winery and decided to graze sheep among the vines during winter rather than cut the grass with a tractor.

It’s delivered numerous benefits; less diesel use, staff can be used for other tasks, and the ground around the vines is not compacted by the tractor.

“We can see the level of storage on the battery and monitor how much energy we are using.”

The school is a great place to think about energy, the main power draw is during the day, with minimal draw in the weekend or during school holidays. Douglas Park School is part of the Genesis Energy project.

The solar panels allow the school to collect energy every day regardless, this can be used by others in the virtual group or released back into the gird.

Sinton said the children were becoming more aware, thinking about what lights needed to be on, and making sure the heat pumps were on the correct setting to make the most of the energy.

“We are stoked to be involved, the school has a long relationship with Genesis and the project fits in well with teaching and learning – it’s quite exciting.

“The virtual project is an example of how we should be using power, lots of houses who each send a little power back to the grid is inefficient, using a virtual power plant means everyone benefits.”

Genesis general manger for retail markets James Magill said the virtual plant builds on the traditional configuration of solar and batteries to control how, when, and where energy is consumed.

“With the introduction of a virtual power plant, we unlock the ability to easily access, co-ordinate, and export the energy generated by the participating homes and businesses to the grid, alongside other forms of generation.

“This can ultimately reduce the total cost of energy for customers.”