Mahoney returned on Tuesday from running two internationals in the British Isles and it was thought the former Black Fern would referee her 50th first class game in one of those games.

But New Zealand Rugby, after a check, has confirmed that she achieved the feat when ran the Farah Palmer Cup final between Canterbury and Auckland in October.

Interestingly, two of the four New Zealanders to do such a double are from Wairarapa, and three of them, including Mahoney, were first-fives in their playing days. 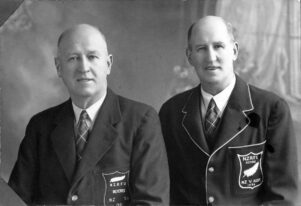 Bert McKenzie, left, who played and refereed 50 first class games, including one test, with his brother Ted, who also refereed a test. PHOTO/WAIRARAPA ARCHIVE

He also had the whistle for the infamous ‘Battle of Solway’ Ranfurly Shield challenge in 1927. Hawke’s Bay won the game 21-10 but later lost it on appeal, having fielded an ineligible player, Wattie Barclay.

Mahoney was buzzing after her return from Europe, where she was in the midst of two come-from-behind thrillers.

Mahoney said her mentor, Harry Quinn, had told her she was approaching the double.

“It’s pretty cool, absolutely, but it’s not something that I’d really thought about. Every year seems to bring up something new.”

In a year which has seen her become the first woman to control a Ranfurly Shield match [Otago v North Otago] and a Mitre 10 Cup game [Hawke’s Bay v Southland] Mahoney said it was hard to pick a highlight.

“It’s not finished yet, I’ve got multiple choices – the England v France game, the Ranfurly Shield, the Mitre 10, the Farah Palmer Cup final – they’re all highlights and that’s a good thing.

Mahoney leaves on Monday to referee in the Oceania qualifiers for the women’s World Cup at Lautoka, Fiji.

Fiji, Papua New Guinea, Tonga, and Samoa will vie for a spot in the 2021 women’s World Cup in New Zealand.

“I’ve got the final in that so it will be pretty cool to ref a game that means a lot with the winning team to go to the World Cup.”