All seats were taken at the inaugural Masterton RSA lunch for World War II veterans, those who served in Japan after that war, and in the Korean War.

Eric Kenny was in the J Force with the troops in Chofu, Japan. He was involved with supervising Japanese working parties but recalled a ride on the train into the city.

“Either side of the track, it was just scorched earth with miles and miles of blackened tree stumps and chimneys.” 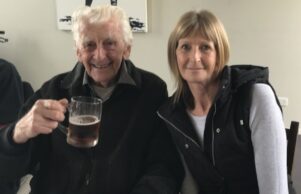 War veteran Brian Marriott, 90, with his daughter Gina Marriott on Wednesday; and [below] with his wife Hazel back in New Zealand after serving in Korea.

Brian Marriott was a driver in the Korean war for the K Force 10 Company. He was in and out of the frontline driving the trucks to wherever they were needed.

New Zealanders with British, Australian, and American forces aimed to keep the Russians and Chinese back and keep control of South Korea, away from the North Korean rebels.

“One time, we drove in with a mission to shoot on the spot two North Korean soldiers that had killed one of our police,” Marriott said.

“A truck came in from each side of where they were [to shoot them]. Then we drove out.”

He said they did worry about who would come back to camp after a day out as there was an “unlucky bed” in their tent. 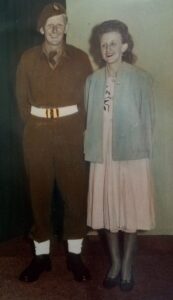 But he remembered with a laugh the speed limit only being 15mph [24kmh], and receiving a speeding ticket.

“I had to go to Seoul in the truck to get wood and went at 25mph [40kmh] and got a speeding ticket. I mean honestly, you can’t drive a heavy truck at 15mph for 15 kilometres.

“It was another red mark on my record.”

But he did have mates helping him out to avoid red marks. They used to answer for him when he wasn’t there because he had snuck off “into town” to Seoul for a bit of socialising.

“They called out my name and it seemed I was there, but I wasn’t.”

He was in South Korea for three years. When he returned to New Zealand, he went straight back into the New Zealand Merchant Navy.

“I was on the Gale down to Timaru and went to a dance and met my wife Hazel.

“I drove her home and we kept dating, got married, and went on to have seven children.”

At the lunch on Wednesday, RSA club president Trevor Thompson started the event with acknowledgements to all those who had served but for the third toast, rather than asking guests to raise their glasses, he asked them to “be upstanding”, which they did and then raised their glasses.

“It is just really nice to hold a lunch for New Zealand servicemen that really are not acknowledged as they should be,” Thompson said.

“In Japan, some of the soldiers were cleaning up after the nuclear bomb went off. Others were maintaining peace around prisoners of war, but these guys are seldom mentioned.”

The RSA initially didn’t include the soldiers who went to Japan.