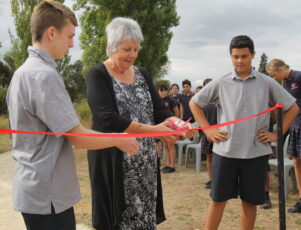 Mayor Lyn Patterson cuts the ribbon to the bike track with the help of former Masterton Intermediate pupils Jaiden Duncan and Bayle Griffin.

The opening coincided with the start of “Movin’ March”, a campaign to celebrate sustainable travel to and from schools in the greater Wellington region.

The track would be the longest of any school’s in the country, with a path of about 1250 metres within the school grounds connecting to 750m in the surrounding farm and wetlands.

Principal Russell Thompson said that the school would implement a roster for use of the bike track from yesterday so that all pupils would have the chance to enjoy it.

However, Thompson said that he also wanted the bike track to be a community resource.

People would be able to come in the morning or after school to utilise the track for walking or cycling.

Thompson said that community involvement in school resources was important and kept the school safe.

He said that a group of 16-year-old boys already came to play basketball in the school grounds almost every evening.

“They just love it, and they look after our school for us.”

Former Masterton Intermediate pupils Jaiden Duncan and Bayle Griffin had been on the planning committee for the track last year.

The pair had moved to Wairarapa College this year but returned for the opening of the track.

During lockdown last year, they had held Zoom meetings to work on the track design.

Griffin had the idea to utilise existing tree stumps in the ground and put limestone around them to create jumps.

He said that they had put their mapping and measurement skills to use and had researched other tracks at Rivenrock and Greytown School. Avid cyclists themselves, Griffin said he had learned to ride a bike without training wheels at the age of two, while Duncan now participated in mountain bike competitions.

Hullena had hosted an open evening for Wairarapa schools after Lakeview School opened its track – the first in the region – in 2016.

“From there, we had 12 schools in the region decide to do it, and Masterton Intermediate was one of the first to put their hand up.”

Hullena said that Greater Wellington Regional Council and Masterton District Council had participated in many conversations about the connection of the school loop track with the wetland area track.

“The school wanted to build a robust concept that made sure they were looking after the farmland, wetland, and the environment, because it’s going to be a community track,” Hullena said.

Masterton Intermediate had secured funding from the Bike On New Zealand Charitable Trust, with both the regional and district councils also providing some funding for the portion of the track on their land.

Masterton Mayor Lyn Patterson made a short speech to pupils before cutting the ribbon to open the track. She said that Masterton Intermediate had spent a lot of time planning the bike track to get all the elements right.

“Sometimes these things take time, but they’re certainly well worth it … Enjoy it, and I’m looking forward to seeing Mr T [Thompson] on those jumps.”