The logging truck with its tipped trailer. PHOTOS/EMMA BROWN

Runaway logs caused chaos during Thursday’s morning rush after a logging truck lost its load on State Highway 2 at Clareville, at around 7am. 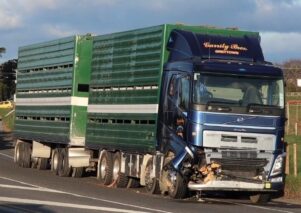 The truck was heading south towards Carterton just after the Hughes Line turnoff, when its trailer tipped on to its side, and several logs fell on to the road, one hitting another truck and car.

No one was injured during the crash and the only damage was property damage to the vehicles.

There was debris blocking the road and the logging truck’s trailer could be seen on its side next to fallen logs.

Diversions were in place at Chester Rd and Hughes Line, adding around 15 minutes to travelling times.

A crane and a digger were required to remove the logs, and the road was not cleared until just before lunchtime.