Lockdown Day One: The new normal – a very quiet earth Featherston is one of the Wairarapa’s quieter towns.

Which makes the public gatherings, and the independent businesses, that bit more intimate.

At Loco, you’ll always see groups of people through the window, laughing and chatting among piles of books, nursing cups of freshly made coffee.

The same goes for Featherston’s other three bookshops.

And its coffee shops and restaurants.

With the town’s business mainly structured around a single road, and flanked with colonial-style shop fronts, it takes on the anxious air of a Wild West showdown.

Before the lockdown, we were only operating on guidance, and for some people that hadn’t been clear. 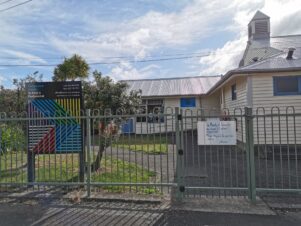 Featherston School is closed, as are the school playgrounds.

But after the legally binding nature of the lockdown, and the [very loud] alert smartphone users got Wednesday night, people have really taken heed in Featherston.

I saw just one person on my way to the shops.

SuperValue, unlike some of the busier supermarkets in Masterton, has managed to avoid large queues and keep itself well-stocked.

However, it, too, is far quieter than it’s been recently.

Lang’s Pharmacy is still open, but only letting one in the door at a time, which has unfortunately caused some angry incidents over the last few days.

But walking around Wednesday night with my dogs, the mood seemed as calm as its always been.

One man even chatted to me briefly from his porch, wishing that I ‘stay safe’. I wished him the same.

The mood in Featherston is one of pulling together.

The town is deathly quiet, and we’ve been prohibited from exercising our communal spirit, but the positives outweigh the negatives, especially with our large elderly population who need to be kept safe at all costs.

And it’s readily apparent that people aren’t letting this lockdown dampen their generosity of spirit. 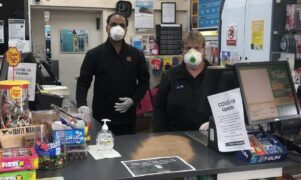 As rain drizzled down, a woman rushed from her car to the town’s only ATM to get money out, before shuffling back and driving off.

Cafes and retail stores were closed, and only two cars were parked up.

“Day one,” a man said grinning as he walked towards his vehicle.

Four Square staff member Kerrie Fitzmaurice was kitted up with gloves and a mask as she processed a woman’s groceries.

Store manager Tanmay Patel, who also runs the town’s Gas petrol station said it had been a quiet morning with hardly any traffic passing through the town.

The store had imposed a “one in, one out” policy.

“The less customers we see, the better it is,” he said.

“We don’t want this to last longer than four weeks – that in itself is a long time.”

He hoped people would follow Ministry of Health guidelines and cut down on their interactions and movements.

A sign on the padlocked entrance to Mount Bruce’s major attraction Pukaha National Wildlife Centre said it would be closed until further notice.

“Rest assured our wildlife continue to be looked after by our wonderful rangers.

“We look forward to welcoming you into the forest again when our doors reopen.”

A lone cop sat watch under the shelter of trees along State Highway 2 between Masterton and Eketahuna.

There hadn’t been much traffic throughout the day, he said – but he had “definitely noticed an increased workload” overall.

“There’s been a few pursuits already. We don’t need road trauma at this time. Mind your speed because we are out and about.”

He said when pulling people over, police were adhering to social distancing.

“If I pulled someone over who was coughing, I’d back up more,” he said.

While he was keeping an eye on traffic, other police staff in Wairarapa were busy responding to wilful damage, unlawful gatherings, and disorders. A sole police car cruised down Queen St and pulled into the Countdown car park.

The officer got out and asked the security staff how they were getting on before he went in to get his lunch.

Police staff are going to visit the supermarkets a few times a day.

Shopper David Matenga said he had noticed a price hike in the Greytown supermarket but Countdown prices were better and the supplies were good.

Customers at Countdown and Pak’n Save queued outside the store, two metres apart and were allowed in as invited.

Shopper Fred Wallace said it was calm and respectful in Pak’n Save.

“It’s a bit funny in there but pretty mellow,” Wallace said. “It’s just so quiet, but it is what it is.” His mother-in-law needed emergency help in the morning, and he was worried about another parent who is in a retirement village, but he can’t visit.

He said he was going to really miss that face-to-face contact with his loved ones.

Greytown, normally bustling with people, keen to partake in its wealth of independent establishments, has now been forced into hibernation.

Once voted New Zealand’s most beautiful small town, Greytown is really something to behold.

Hanging baskets overflowing with blossom, a wealth of independent businesses offering bespoke goods and services, and scores of coffee aficionados, sampling the roast at The Offering or Cahoots.

This all seems like a distant memory in Greytown today.

Of all the towns in Wairarapa, it is probably Greytown where the contrast, pre- and post-lockdown, feels the most tangible.

It’s always seemed, to me, like a place geared more strongly around service and curation than any other. Curating the best experience, the best meal, the best holiday, the best vista.

This seems to be what Greytown is all about. 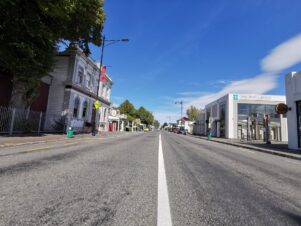 This in no way just extends to buying and selling products, though. Greytown has a real character, made so by its proud, friendly inhabitants, and its well-planned, visually pleasing streets.

Yet with no people to inject life into this space, it seems, like the rest of New Zealand, paused; a disconcerting freeze-frame of rural idyll, vacant for the first time since it was founded by the soldier, explorer and writer Sir George Grey; on this very day, in fact: March 27, 1854.

The future is uncertain for many of Greytown’s businesses, and for the people who derive from them their livelihood, and their mortgage.

The tourism and hospitality sector is going to be the worst hit by this pandemic, and, while this will affect the whole Wairarapa, it feels sadder in Greytown, where these industries are not fledgling, but established and proud.

Its very lifeblood is being called into question.

For now, the mood seems to be: wait and see. The road to Martinborough is deserted.

What begins as a tranquil drive from Featherston becomes more unnerving the further I travel.

There’s no one here.

I pass one van and two cyclists on the 20-minute journey to Wairarapa’s winemaking capital.

It’s the wildlife I see more of.

I have to beep three times at flocks of starlings and birds of prey, now the chief road users, who’ve already become accustomed to idling on the highway, picking at a piece of roadkill without disturbance.

When I pull up to Memorial Square, this feeling of disquiet peaks.

It’s surreal to see a town, normally so vibrant, utterly emptied out.

I can’t help but think of disaster movies; Cillian Murphy staggering across Westminster Bridge in 28 Days Later, or Will Smith navigating a deserted Manhattan in I Am Legend.

The iconic Martinborough Hotel, with its beautiful white timber cladding, stands dormant, overlooking a barren square; once dotted with locals relaxing and chatting between errands, now sharing in the eerie silence.

Martinborough’s supermarket, Four Square, I had half expected to be busy.

It, too, had only a handful of customers, all seeming to make for a swift and clinical shop, before returning to their boltholes to safely wait out this lockdown.

With winegrowing deemed an essential service, the industry soldiers on, behind closed gates.

But the flocks of wine tasters cycling from vineyard to vineyard, or stopping over in the centre for a bite to eat, are nowhere to be seen.

While this scenario will be a strange, temporary new reality, the plus side is that people are seeming to take this seriously.

And when it means saving the lives of countless elderly people, a bit of quiet seems, really, like no trouble at all. 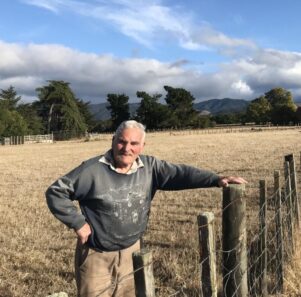 Carterton residents brought colour to a calm morning with people pounding the pavement in their colourful exercise gear with various breeds of contented dogs.

One dog walker pointed out a “wonderful sign” down by Carrington Park’s toilet block.

The words “Everyone love each other, big hugs” was chalked out on the footpath.

Its manager Giles Kendall-Carpenter not opening up shop is a very rare occurrence.

Vinnies functions as a drop-in centre and chat hub as well as a bargain treasure trove.

Further up the line, 79-year-old Jack Kampen was putting feed out to his cows and didn’t quite realise every shop was closed.

Kampen came out from Holland in the 1960s and was a two-year-old when Holland was invaded by Germany in World War II.

He recalls his life being restricted as many are experiencing now.

He said, “we call this a silent war”.