Colombo Road bridge at time of construction, with five men, including consulting engineer, G Laing-Meason, designing engineer, S T Silver, and contractor R Sanders. PHOTO/WAIRARAPA ARCHIVE For many years the Waipoua River was the northern boundary for the township of... read more 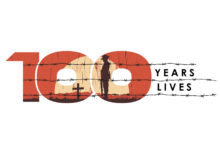 Edward Fisher was born in Brisbane and came to New Zealand, where he settled in Masterton. In 1909 he was playing for the Third XV and that year they won their group’s championship. Fisher was regarded as a “very fine goalkicker”. At this time, he was working as a... read more 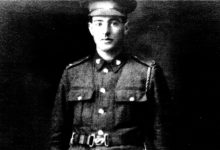 Killed before receiving medal for bravery

Walter Evans was awarded the Military Medal for gallantry in the field, but did not live to see it presented. PHOTO/WAIRARAPA ARCHIVE Walter Andrew Evans was from one of the original European families to settle in Masterton. He was born in 1895 to Maria and Frederick... read more 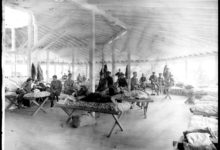 Joe Governor suffered a miserable time in various hospitals during the war before being returned home, where he spent time in Rotorua’s King George V hospital (pictured). PHOTO/WAIRARAPA ARCHIVE Joe William Governor was the son of William Governor [Kawana] and his... read more Masterton’s Harry Selby, second from right in the front row, died on October 5, 1917, while serving as a gunner on the Western Front. PHOTO/WAIRARAPA ARCHIVE Among the first Masterton soldiers to enlist for World War I was the popular athlete Harry Selby. He was born... read more Crush injury “worse than being shot”

George Scrimgeour was born in Waipawa and later came to Masterton with his father, who was a hotelkeeper and had taken up the licence of the Club Hotel. Scrimgeour became very sick with pneumonia in 1912 and was hospitalised for a period of time before he made a... read more 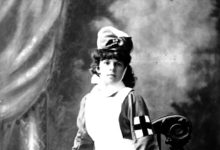 Ethel Barr talks about when her husband, George returned from the war. She was excited about his return, and took the baby down to meet him. However he had bad news for her. – AUDIO/WAIRARAPA ARCHIVE More:   read more