‘It couldn’t have gone to a nicer person’

Like a hero from an old cowboy film youth co-ordinator Alan Maxwell came to the aid of his community in a time of need.

And for his efforts, which included organising and delivering food parcels and necessities to “basically the whole of Featherston” throughout the lockdown, he has been given a new steed.

MG Motors New Zealand gave Maxwell a brand-new MG ZS to use for six months after he was nominated by Kiri Smith, one of the people he delivered food parcels to.

“I was absolutely convinced it was a prank call and someone was up to some kind of mischief,” Maxwell said.

But after a quick Google search he found out the new car ‘was legit’.

“I was a bit stunned really. I was stunned that Kiri had nominated me on the internet and that I’d been selected.”

Across the country 33 local legends were nominated.

The ten nominees with the most votes received an MG ZS for six months as a thank you for their hard work.

When lockdown was announced Maxwell saw a need in his town – a need he didn’t think twice about stepping up to fill.

“The government announced that there were only three approved services and the only one down here was the police, and they didn’t have the resources to do the door to door stuff.

“We registered my trust, the Wairarapa Whanau Trust, as an emergency service and got into it.”

Through his trust and an army of helpers and support from iwi, Waiwaste, Foodbank, South Wairarapa District Council, Featherston Community Board, and Fab Feathy they kept the community fed and safe. 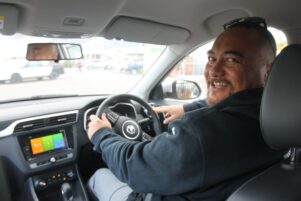 Youth coordinator Alan Maxwell behind the wheel of the new MG ZS.

“It was really just the community wrapping around each other. I was just the front guy running around and that’s how you want it to be, you want to minimise the risk.

While Maxwell’s day job is focused on young people, he said community work is “just what I do”.

Featherston is full of people who help out.

“My trust has grown to the point where we have quite a few volunteers, we managed to purchase a bus because of course transport’s always been an issue here.

‘I’ve got three or four adults who help out regularly, and another 20 to 30 locally in South Wairarapa, but right across Wairarapa there’s easily about 40 volunteers who put their hands up to help when we need it.”

During the lockdown Maxwell came around with food parcels and wood for Kiri Smith and her daughter, Smith said.

“He works hard, and he does a lot for the teenagers in town.

“I was happy for him, really happy – it couldn’t have gone to a nicer person – he does a lot, but he never asks, he never expects any praise.”