From left: A lot of the post-production work can be done from home, as demonstrated by Jaspers [back], Laura Hancock and Nathan Stratford in this in-woolshed set up. PHOTO/SUPPLIED

The woolshed, for once, is quiet when I pull up to watch Celia Jaspers at work.

It’s a beautifully warm winter day at her 326-hectare farm just outside Martinborough, where she’s filming for her latest project. 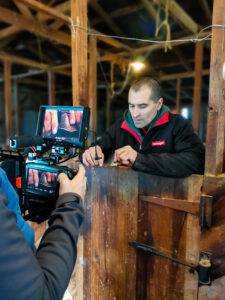 There’s no sheep today as the filming is focused on the art of shearing, with world champion shearer Nathan Stratford sharing tips about his tools of the trade – literally!

It’s their fourth day of filming and camera equipment and run sheets litter a side table in the woolshed.

Last week they were busy filming in Hawke’s Bay.

Being a smaller shoot and one separate from her Country Calendar work, it’s just Jaspers behind the camera today, both directing and filming.

It’s the combination of logistics, creativity and technical skills needed to do this work which first appealed to Jaspers and got her into film.

Growing up on a small farm in North Canterbury, she says she found television when she was 15 and started working at What Now over weekends and holidays while still at school.

“I was always really creative and did photography at school. TV brings all those elements together for me.”

At age 18, she was offered internship at TVNZ.

Her “light bulb moment” came when watching Jan Campion’s ‘The Piano’ and now a change of direction towards scripted content and film-making is something she’s working on between shooting and directing for various television programmes.

Jaspers started directing for Country Calendar five years ago when a cameraman she had worked with recommended her.

Her first piece was on Lime Gully, in Hinakura, featuring Barb Turner and James Walker’s vineyard.

“I thought it would be a one-off.” One-woman band: Jaspers enjoys both directing and getting behind the camera to film. PHOTO/ GIANINA SCHWANECKE

Her work with House Hunters International – my favourite reality property show about finding a home when you relocate countries – takes her even further afield from the rural townships and family farms featured on Country Calendar, covering cities in New Zealand, Australia, and parts of Asia-Pacific.

“It couldn’t be more different [from Country Calendar],” she tells me. “They are completely different disciplines.”

She describes it as switching between the left side of her brain and the right side.

House Hunters International is a typical reality TV series while Country Calendar is “much more organic”.

Coming from a rural background helps with this side of things and sets her apart from some of the other crews.

“My roots are really in a rural environment. I can relate really well to the farmer.”

The past 10 years have also been spent farming with husband Alastair – originally from Eketahuna – running a 326-hectare arable and fattening operation.

It’s clear just how knowledgeable she is as I watch her work with Stratford.

Shearing is a very technical skill and it’s clear she had a firm grip on the subject matter and basic concepts as she directs him and asks him questions to expand on talking points.

In between takes she looks at the run sheet to make sure she’s got it all.

She’s a one-woman band checking the monitor for the perfect shot, listening to the audio for chatty and distracting journalists, and directing the talent.

It is a little unusual for the director to also be the cameraman – when filming for Country Calendar she has a separate camera and sound crew – but Jaspers likes both parts of the job.

Her biggest challenge is time management and “trying to fit everything in”, she says.

When she first started directing at Country Calendar, she had two children – both under five.

They’re both at school now but it’s lucky that most of the work can be done from home and her husband Alastair is able to keep the household running when she’s away for shoots.

Research, writing and editing prep can all be done from home and she’s normally only away for five days while filming.

It’s just Jaspers and her husband on the farm, so life is fairly busy.

“I often answer [Country Calendar] calls while out driving the tractor,” she tells me.

The secret formula for a good episode came down to three elements.

“The location looks pretty; talkative people who are passionate about something; and a good story.”

It’s about capturing what’s happening on farm for the viewers at home.

“The visuals are so important for Country Calendar.”

She says she is proud to work on New Zealand’s longest running television series – understanding the urban-rural divide is always there but hoping that the show can bridge that in a small way.