Club rugby’s back on menu

Wairarapa-Bush club rugby kicks off this weekend with the first round of the Town and Country series for the Lane Penn Trophy. In a two-part series, Times-Age sportswriter CHRIS COGDALE looks at the teams’ prospects starting with the four town-based teams.

The 2020 champions will have a different look from the side that came back from 22 points down and lifted the Tui Cup with a last-minute penalty by James Goodger.

Eight from the 22 named for that final are missing, with utility forward Goodger the biggest loss. The 62-cap Wairarapa-Bush representative and NZ Heartland XV representative has retired because of a shoulder injury and taken up refereeing.

Their loss is offset by the return of No 8 Shannon Rimene and flanker Marcus Ale. Utility back Kane Betteridge is a newcomer from Hawke’s Bay.

The green and whites will again be coached by Gerald Lologa and led by inspirational captain Peter Beech, with the underrated Paddy Gluck steering the team from first-five or halfback.

Team manager Mark Brown said squad numbers were okay, but it won’t take much for their depth to be tested.

“If we were to get some injuries early in the season, we might be struggling. But I think we have a squad that is capable, and it’s just what happens on the day,” he said.

In the preseason, Marist lost 12-17 to Whanganui Marist at the Spillane Cup tournament; otherwise they have seen little action. Brown said that meant they will treat the Town and Country as their preseason.

“I don’t know how many clubs will taking the first three games seriously or whether they’ll just use them much like we are. It doesn’t mean anything for the actual competition,” he said.

Looking further ahead, Brown was confident there is the experience and talent to be serious challengers in their title defence.

“It will be just a good honest effort by our lads, and we’ll give it our best shot.

“I know the personnel is different but we’re targeting a top four placing and then you’re one game away from the final, just like we were last year.”

Last year’s beaten finalists have assembled a talented squad despite losing several quality players who lined up in 2020.

There are some exciting additions, most notably former All Black winger Zac Guildford and former Tongan prop Tolu Fahamokioa, who has played for Waikato, Hawke’s Bay, and Wellington, and made one appearance for the Hurricanes in 2015.

Tavita Isaac will again captain Greytown, while Mark Childs has been joined in the coaching ranks by former Wai-Bush coach Paul Pottinger, who will take charge of the forwards and defence.

The addition of the astute Pottinger adds a ton of knowledge and experience. He coached Greytown to championship victory in 1995, had the reins of Wai-Bush in 1997-98, coached the Hurricanes Secondary Schools, and has been a selector for NZ Secondary Schools.

Childs there was “good depth upfront especially in the tight five with several able to play in the loose and the same with the loosies in the backs”.

It was too early to tell if the team have improved or fallen away since last season, but the preseason has been good.

“Our goals – enjoyment is the key thing for players, coaches and management. If we’re having fun, then results tend to flow.

“We’re looking to build on last season by getting players to understand their roles a bit better on the field.”

New Carterton coach Neil Rodger is targeting a top-four finish in his first year in charge.

Rodger has stepped up from the assistant coach’s role under Chris Senior, who has returned to coach the Masterton Red Star senior reserve side. Rodger is joined by new forwards coach Trevor Will.

Arguably the biggest gain for the Maroons is the transfer from Gladstone of veteran Inia Katia, who can play anywhere in the backline and is fulfilling a desire to play for his father-in-law Bernie Lett’s old club.

Rodger said other new faces include two new Tongan backs and another Fijian back.

In the forwards, Francis Muller and Hone Vella return from injury, and there are three recruits – Waisale Tabu, Scott Collins, and Richard Dick from Vanuatu.

Blockbusting No 8 Jack Loader and frontrower Thomas Innes have moved to Wellington, and Ethan Pinfold is injured.

Rodger said the squad’s strength was better than last year, and there was real depth across Carterton’s two teams.

Injuries and unavailabilities forced Carterton to pull out of the Wai-Bush club preseason festivals, but they still had two good preseason hitouts against Whanganui Marist, and Patea.

It is too early to gauge where the squad was in relation to the other clubs, Rodger said.

“Improvements, we will have to wait and see, but fitness has been a real focus for us,” he said.

“Our expectations are to win more games than we did last year, which will guarantee a top-four spot.” 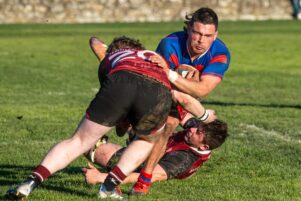 Building a strong team culture on and off the field is the goal of new Pioneer coach Koti Tikitiki-Whittaker, assistant coaches Willy Harmon [backs] and Victor Thompson [forwards], and manager Eric Kohitolu.

Pioneer returned to the premier competition in 2020 after two years’ absence but failed to win a game despite having a talented group of players.

Tikitiki-Whittaker said if they get the culture right, the results will follow.

“Preseason for us has been a focus on building a culture off the field of whanau and brotherhood,” he said.

“As part of that, we attended an overnight marae stay [noho] at Tumapuhia-A-Rangi marae, Homewood, where we all came together to get to know each other better.”

Tough-as-teak loose forward Jonte Miller will captain the side, with Conan Gray-Harmon and Nikora Ewe the joint vice-captains.

Tikitiki-Whittaker singled out flanker Himiona Haira, who made his Wai-Bush debut in 2020, midfielder Shayne Harmon, and No 8 KJ Rimene, who he rates as a player with a big future, and speedy fullback Sean Robinson [returning to rugby after five years away], as players to watch.

Tikitiki-Whittaker said there has already been a huge improvement in the team.

“With a co-constructive approach to this season, my expectations as a coach are that the players have fun, set high achievable standards for themselves, and give everything their best efforts.

“The players have also set team goals, which are achievable if they’re willing to continue to work hard for each other.”

All the hype is around the home side and their star recruitments. Pioneer will be fizzing to hit the ground running, and if they get a flow going and confidence high, it will be a difficult nut to crack. However, Greytown may have just a few too many shots to fire.

Coggie’s Prediction: Greytown – but closer than many people will expect.

Of all games this weekend, this is probably most difficult to gauge where the teams are in their preparation, given their absence in preseason encounters. On paper, Carterton have had the better buildup, and homeground advantage might be enough to swing the game their way.