Life: A fight to survive 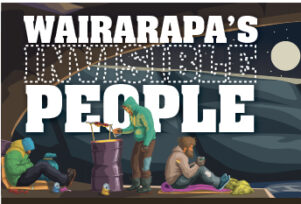 Donna Laing has been a social worker in Masterton for 30 years and it’s fair to say she has seen it all.

She volunteers as a host at the Masterton homeless shelter and says she gets so much out of it.

“I come away feeling a sense of personal reward, I’m honoured to be part of it.”

The dilemma is that many of the homeless are in their situation because of circumstances, but also because of their life choices, addictions, and abuse.

For her, the essential thing is that the shelter provides the basics, a hot meal, a shower, a chance to be dry, wash their clothes, and safely store their possessions so they don’t need to be carried around.

“Taking a bit of life weight off them for two hours” is how she describes it.

There is no denying that some people who have need of the shelter’s services have challenging behaviours, mental health issues and alcohol and drug dependencies.

Three hosts ensure that strict rules are adhered to, and drinking, taking drugs, or becoming aggressive and fighting, are not allowed.

They have all had police training in de-escalation techniques, but as Donna explains, once you spend time with them you understand that they are in “survival mode”.

She says their basic responses are “fright, fight, or flight.”

“Just like us, many of them have had a life, been to school, and had families.

Mental health problems are a cruel thing, it’s a fine line crossing over from sanity to mental health issues for any one of us.”.

For her, the best day is when she can help someone homeless just have a safe place to relax, enjoy some home comforts, maybe watch a movie and doze.

Although people who live rough tend to have a code of their own in terms of looking out for each other and respecting each other’s belongings and space, they find it hard to have faith in outsiders.

Once trust is established, Donna’s hope is that they feel they have someone to turn to if they need help.

What you do for the least of my brothers… The Rev Wendy Thornburrow was ordained as a priest in 2019 but she has always wanted to serve others, even as a 17-year old growing up in Havelock North.

She is a relief host for the homeless shelter, and also finds it fulfilling to be able to see the progression of confidence, as people who were once suspicious and reserved, become more at ease.

There is an urgent need for a night shelter.

The Empire Hotel in Masterton used to be available as emergency accommodation but now that it has been demolished, there is nowhere.

Usually, the homeless have exhausted all options when it comes to accommodation, their families don’t want them and they can’t afford to pay rent.

There is no vacant social housing available in Masterton, and none likely to be built for at least two years, according to Wendy.

It’s a problem, there are strict guidelines governing the running of a night shelter.

These include it not being allowed to be in the central business district, or in a residential area, nor can it be near a school or childcare centre.

It does need to be near a town for walking and thus the industrial area is probably most suited.

The committee overseeing the Masterton shelter is hopeful that they can apply for funding now they are an incorporated society.

If a factory that could be adapted for their needs became available, they could pay rent.

They have been “damaged by life” she says, sadly, “but it is not our job to judge them, even if they blot their copybook, we should never turn people away or stop loving them.”

Anyone wanting to offer help or donate money should contact Lyn Tankersley of the Masterton Foodbank.