Featherston Library closed on Friday afternoon after a group of protesters harassed staff members, calling them “Nazis” and leaving them shaken.

A member of the public alleged that a Featherston Community Board member was among the protesters.

A South Wairarapa District Council [SWDC] spokesperson said that the protesters opposed the library’s enforcement of the vaccine pass mandate.

“Staff are shaken and upset by the ugliness of the incident,” SWDC wrote on their Facebook page.

The incident was reported to the police.

South Wairarapa Mayor Alex Beijen said that he did not yet have all of the details of the incident.

“It’s quite reprehensible behaviour if what I hear happened has actually happened,” he said.

“To my understanding, a number of people purposefully marched into the library, abused staff about this council and all councils’ requirement for vaccine passes. They were swearing at the staff, abused staff, called them Nazis, and distributed pamphlets of some description.”

Beijen said the police had been called, and the library had been closed for the rest of the day.

“We do treat this incredibly seriously, and we will prosecute to the extent of the law. Such behaviour of residents of South Wairarapa is despicable and should not be tolerated either by the council or the public. 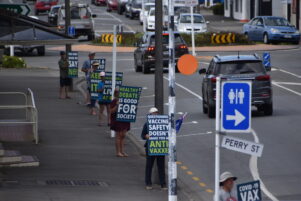 At about the same time as the incident at Featherston Library, a group protesting vaccines for children gathered in Masterton. PHOTO/GRACE PRIOR

“They need to start taking responsibility for their actions and choices rather than blaming other people.”

Beijen was critical of the protesters and said he felt for the staff impacted.

“It’s hard enough being a council employee with some of the poisonous people out in the community, let alone this happening.”

A Featherston resident, who did not wish to be named, said that their friend was at the library at the time of the protest.

The friend said they had seen a member of the Featherston Community Board participating in the protest.

Beijen said this allegation had not been confirmed.

“If it’s true, it will raise even further concerns,” he said.

“If it was found that an elected official was part of it, I would be calling for their resignation immediately.”

A police spokesperson said police received a report of a disorder on Fitzherbert St Friday afternoon.

“We received the report shortly after 4pm, but it appears to have occurred earlier in the day,” the spokesperson said.

“As such, police have not attended at this stage, and we don’t have further information to provide.”

From early December, when New Zealand’s traffic light system came into effect, Wairarapa’s unvaccinated people have been unable to use council pools and libraries, with the exception of Masterton District Library.

All attendees at council, community board, and committee meetings also needed vaccine passes.

A SWDC spokesperson said it was hoped that Featherston Library would reopen Saturday as usual.

She said the training that staff received was consistent with all the libraries in the region.

“They request to view people’s vaccine passes, and they are scanned.

“But we know that there are members of our community that don’t have vaccine passes; they choose not to and have also criticised the council for taking that stance. While we understand their position, it’s not something that we can comply with.”

The chair and deputy chair of the Featherston Community Board could not be reached for comment by the time of publication.