Megan Hull [20] breaks away in a 2019 Pro-League against Argentina. PHOTOS/GETTY IMAGES

Training in heat chambers, playing and training in full thermals, wearing oxygen restricting masks, and even wearing black plastic rubbish bags are some of the lengths Wairarapa’s two hockey internationals are going in preparations for the Olympics.

Dane Lett and Megan Hull were last week named in their respective men’s and women’s squads to the 32nd Olympiad in Tokyo.

Forecast to be the hottest Olympics in the history of the Games, temperatures in Japan’s capital could approach 40 degrees Celsius, with relative humidity around 80 per cent. 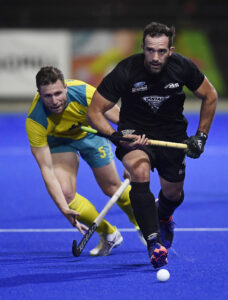 Dane Lett beats an Australian defender in the 2019 Oceania Cup.

Lett, who is based in Wellington, doesn’t have regular access to the heat chamber at the NZ Institute of Sport in Auckland and has done much of his preparation at home.

“I’ve made a makeshift home job for it, but it’s all about trying to put yourself in the toughest position you can, so when we turn up to Tokyo, we’re good to go,” he said.

“I’ve been running around in heaps of layers, a full tracksuit, and a face training mask which restricts the oxygen intake.”

When at the Auckland-based training camps, Lett has used the heat chamber, saying that it’s a real shock to the system for the first few times, and it could make you feel pretty ill.

“It’s pretty uncomfortable, and you want to get out of there because the heat traps you, and then you have to exercise in it. But the more you do it, the more you feel accustomed to it.”

Hull, who is based in Auckland, and has used the heat chamber regularly, said the women have also been wearing full thermals and even black rubbish bags during games.

Both Black Sticks teams have had experience playing in Tokyo’s summer, most recently in 2019, with Hull saying the heat is ‘something quite different’.

“It was a wake-up call to feel how hot it really is. You think it’s going to be hot, but you get there and go you go ‘wow’ because it is on another level.”

As for her selection, Hull said it was a bit surreal and she had a double-take to make sure it was her name in the 16-strong quad.

“It was really special because we were on a rest week. I was with a few of my family and [partner] Geoff and I just got to have a few hugs and stuff like that.

“Sometimes your family and people close to you are more nervous. I’m the lucky one who gets to go to these things, but they feel everything with you, the highs, the lows, and they’re pretty special.

“It’s pretty incredible, and it’s a massive privilege and honour.”

Despite her excitement of being selected, Hull said she felt for those who had missed out.

“…it’s horrible it has to be 16 because every single person in the [25-strong] squad has put in just as much as the next girl.”

Lett’s selection for the Olympics means that he will experience the three big world hockey events after playing in the World Cup and the Commonwealth Games, in which he won a silver medal on the Gold Coast in 2018.

But that was far from his mind when he started playing hockey regularly at 12-13 years of age.

“When I started playing hockey and was coming through, it didn’t really seem to be an attainable task to play for New Zealand.

“The Olympics are the pinnacle of our sport, but since I’ve been playing seriously, I’ve always known that’s the main event I want to get to.”

Although he was excited about his selection, he said it felt a bit weird.

“I try to have a real focus on routine and try and do my best for the team. I’m honoured to be going, but I’m sort of mindful that some of us would be going and some of us wouldn’t.”

Both Black Sticks sides will play two-test series against Australia in Perth next week before returning to New Zealand for their final preparation.

Once in Tokyo, both teams will meet opposition they haven’t played against for 18 months or more because of covid-19 restrictions.

“A lot of us haven’t played much hockey for quite a while, so for us, that can be a bit of a positive because other teams haven’t seen much of us, whereas many European teams have been playing quite a bit this year,” Lett said.

“The whole Games experience is going to be quite different, as well.

“There are only local spectators, and I’ve heard they’re not allowed to clap and cheer and stuff like that, so it could be quite a weird thing.”

The board of Hockey Wairarapa has called a meeting tonight to discuss poor player behaviour in light of the increasing incidents of poor treatment of umpires by players. It will communicate its decision regarding disciplinary measures to be used for the rest of the season.

A representative of every team participating in the senior hockey competition must attend the meeting at the Clareville pavilion today at 6pm.

Any teams failing to turn up will be docked points in their respective competitions.