At the grand age of 96, a pillar of the Greytown community, mother of 10, grandmother, and great-grandmother Petina Marguerite Matthews “Polly” died on Wednesday.

She was the wife of the late Kingi Matthews QSM, a well-known Maori All Black who also served in the 28th Maori Battalion.

She had 10 children, including seven boys – all of whom played rugby – which meant washing a lot of rugby gear, for many years without an electric washing machine.

She lived in Greytown for 66 years and spent her later years at Palliser House in Greytown, and then at Roseneath Lifecare Village in Carterton.

Polly died peacefully at the rest home surrounded by family.

Her marae was Te Hika a Papauma.

Matthews’ family members are gathering at the marae and are organising her funeral, which is proving a “little tricky” in covid-19 Alert Level 2 restrictions.

“My grandmother has over 100 immediate relatives, so even for family to come and see her is being done carefully,” granddaughter Emma Matthews said.

The Matthews family has representatives from the two Wairarapa iwi and also Wairarapa-Bush Rugby Union coming to pay their respects.

“She was one of a kind with a great sense of humour, it is hard to believe she has gone but she lived to a great age.”

Matthews said the family wasn’t expecting this as such, but the past few months were a bit tough for her. 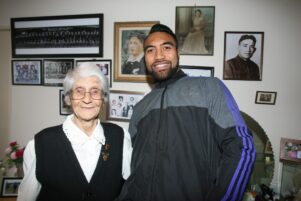 Polly Matthews and former All Black Victor Vito in Greytown.

Former international rugby referee and life member of Wairarapa-Bush Rugby Union Bob Francis said Matthews was a big part of the rugby community and her speeches at awards nights were always a highlight.

“She was a strong woman and a real character and will be greatly missed,” Francis said.

The Greytown Rugby Club has posted on social media that it is with heavy hearts they mourn a former club patron.

“The Matthews name runs deep through the club’s history and will continue to be a strong part of our club through her children, grandchildren and great-grandchildren.

“Our love and thoughts are with Polly’s family at this time.”

A private family service is to be held for Matthews because of the covid-19 restrictions.