A Wairarapa-based author has written a science fiction story about bees, inspired by the rolling hills and unspoilt environment of his neighbourhood. 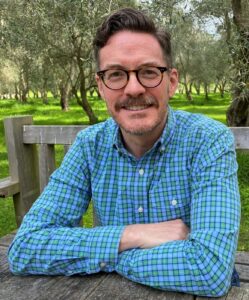 Jared Gulian put the finishing touches to his second novel ‘The Last Beekeeper’ while in lockdown last year at his property outside Martinborough.

No stranger to the literary world, his first book, best-seller ‘An Olive Grove at the Edge of the World’, describes how he and his partner left the big city behind to live in South Wairarapa with their olives, chickens and pet pigs.

“It’s a science-fiction thriller, and it takes place during the near future during a global bee crisis when bees are endangered,” he said.

“There are giant corporations that take care of pollination for agriculture.”

The story centres on a reclusive beekeeper who manages his hives traditionally.

“He lives on a remote island in Lake Michigan and wakes up one morning to find someone has torched his bee hives.”

Further dread is thrown into the mix with the presence of an unknown horror in a nearby forest.

“There’s something in the woods that’s been frightening his neighbours, and he doesn’t know what it is. So he decides to try and figure out what’s going on.”

Gulian freely admits much of the inspiration for the book has come from Wairarapa, especially his own corner of the region.

“I’ve never lived in a rural area until I came out here. The main character of the book has such a relationship with nature and a rural area. It’s completely inspired by New Zealand in so many ways,” he said.

Gulian said he is fascinated by bees and beekeeping.

“I’ve been reading about beekeeping and the problems that are happening within the beekeeping industry, including colony collapse disorder. What would happen if they got worse,” he said.

“We like to say we’re organic by neglect,” he said, adding they use no pesticides on the trees.

The vegetables, greenhouse, flower garden, native garden, chickens, and elderly pet kunekune pig Dougal are all managed with the environment in mind. Wild and kept bees pollinate the plants.

“There are bees everywhere around here,” he said. Gulian is acutely aware of the impact of environmental challenges on bees, including mites.

“I’ve been reading about ways people are trying to solve the problem. I did a lot of research for this book. There is a lot going on to try and figure out what we can do to make sure bees don’t get more endangered. They are so critical to our food production,” he said.

“The book was born out of my concern of the situation with global bee populations, and I love monsters. I’ve always loved science fiction fantasy.”

The book took three years to write, and the second in the series is already under way.