Police take photographic evidence of the diving board above the diving pool at the school. PHOTOS/MARY ARGUE

A man pulled unconscious from a Masterton school pool on Monday morning has subsequently died.

Police confirmed on Wednesday afternoon that the 58-year-old, who suffered an injury at St Matthew’s Collegiate School, had died in Wellington Hospital.

He had “spent an amount of time underwater”.

Emergency services were called to the Pownall St school about 3.45am Monday.

The man was pulled from the pool by an ambulance crewmember and was flown to Wellington Hospital in a critical condition. 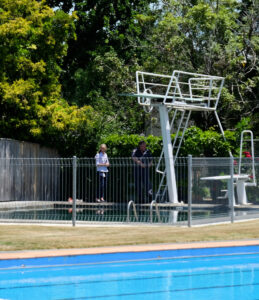 A man in his fifties has subsequently died after an incident at a Masterton school pool.

Police were at the scene on Wednesday measuring the length and height of a diving board next to the smaller of two pools at the school.

One man was taking photographs while another held a long, thick measuring tape.

Trinity Schools Trust Board chairman Rob Blackett said they were assisting the police with their inquiry and doing what they could to support the victim’s family.

He said he was unable to comment on the investigation and it was too early to say whether the school or board would take action as a result.

In a previous statement, police had said the man “should not have been there” and were investigating how he and an associate had accessed the pool.

The pool area was ringed with a high fence and had a padlocked gate and signage in place.

Police extended their condolences to the man’s family and loved ones.

They said they would continue to make inquiries in relation to the death on behalf of the coroner.