Wairarapa United’s fight against relegation from the Central League will go down to the final game after a 0-2 loss away to Lower Hutt City on Saturday.

United had done well to hold their talented opponents, who are based around the Wellington Phoenix Academy, scoreless at halftime, but the game changed in the 51st minute with a red card to one of United’s most influential players, centre back Scott Adams.

United coach Davor Tavich said the American was ruled to have fouled a player as the last line of defence.

“The argument is that he won the ball and in the process the other player fell down and it looked to me like that because I had a good view of it,” he said. “But the referee was behind it and he called it a foul and being the last man that justified the red card.

“Once we went down to 10 men, it was an uphill battle after that.”

From then Lower Hutt dominated possession but couldn’t pierce the stubborn United defence until the 79th minute when Cory Chettleburgh was adjudged to have handled the ball in the box from a close-range shot.

United had chances to equalise, including one where two players went for the same ball in the six-yard box, before Luis Toomey ended any prospects of a late comeback with the second goal in stoppage time. 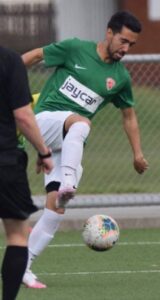 Scott Adams was red carded in the 0-2 loss to Lower Hutt City.

Tavich said it was one of those games where things didn’t go their way.

“The players put in an enormous fight and played some good football but again Lower Hutt had most of the possession and capitalised on being one man up,” he said.

“We were dangerous on the counterattack and we had a few chances, but after we went down to 10 it was just defence, which we did well until the penalty.”

Adams’ red card means he will miss the last game against Waterside-Karori, unless United can get the decision overturned on appeal.

The result leaves United two points ahead of Stop Out in the race to avoid relegation.

A United win over Waterside-Karori on Saturday or a Stop Out draw or loss will guarantee United their place in the Central League. However, a United draw or loss and a Stop Out win over Napier City Rovers, will have United relegated to the Capital Premier League.