Greytown is one of three towns in the South Wairarapa district. PHOTOS/FILE

Council officers anticipated a late flurry of nominations ahead of the midday deadline and they were not disappointed.

Incumbent mayor Viv Napier has learned she will face four challengers, including Graeme Farr, who will run in the South Wairarapa, Carterton and Masterton mayoral races on his ‘Vote For The Tunnel’ ticket.

None of Greytown ward’s existing councillors – Colin Wright, Margaret Craig and Mike Gray – were on the list of submitted nominations.

Five candidates new to council will seek the vacancies.

Martinborough will also have a five-way contest.

Deputy mayor Brian Jephson will look to keep his post in the Martinborough ward.

Featherston’s Carter, Colin Olds and Ross Vickery will run to retain their seats. 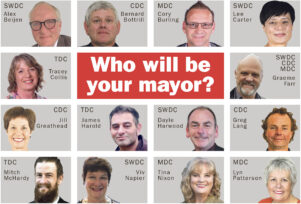 A call for further nominees is likely for the Featherston and Greytown community boards.

Each board received only three nominations for four vacancies.

Should more than one extra person stand for each board, new by-elections will take place.

Existing nominees are likely to be accepted.

In contrast, seven new names will look to take one of the four community board spots in Martinborough.

Carterton mayoralty being eyed up by four hopefuls this year

Twenty-one people are running for the eight-person council.

Last Friday, Graeme Farr announced he was running for the Carterton, Masterton and South Wairarapa mayoralties.

Bottrill is running under on Rates are Too High [RATH] ticket.

“It is the RATH intention to freeze rates immediately, and once we have established a process, implement rates reductions.”

The mayoralty is being contested by Bottrill and Farr, and councillors Greg Lang and Jill Greathead.

Vergunst had earlier said she would not be running but had had a change in personal circumstances which allowed her to run.

She wanted for young families to be represented.

“Across New Zealand, only six per cent of elected members are under 40 years of age.

“That’s not representative of our population.”

He is running on a campaign of limiting rates increases, aiming to keep with increases in line with inflation, as well as reducing costs through shared services. Queen Elizabeth Park is the pride and joy of the Masterton district. PHOTO/FILE

Four hats in ring for Masterton mayoralty, one was last minute

Electrician Cory Burling has increased Masterton’s mayoral candidates to four, with a last-minute nomination on Friday.

The president of Douglas Villa Football Cclub, the 40-year-old is Wairarapa born and bred, and said the final decision to throw his hat in the ring was the culmination of four weeks of thought.

“You can be someone who sits behind the scenes and complains, or someone who puts their hands up and does something,” he said of the bid.

“I’ve got a close circle of friends and a lot of them thought I should do it – and a few said I was crazy.

In terms of issues, he believes carparking needs to be preserved in Masterton, and roading safety and usability are priorities – a few more roundabouts would make getting around easier, particularly at the intersections of Ngaumutawa Rd and Perry St with State Highway 2.

Burling would also like to see a dam in the Masterton district to store water, with a hydroelectric generation, and a fish farm.

On the future of the town hall, he is pragmatic.

“A lot of people say it is historic, but the building is just sitting there and no one can live in it, or use it.

“I am not particularly fussed [on what is done with it], but it should be what the community wants and needs.

“Being historic is in the past.”

As a single dad, bringing up three children – two girls aged 14 and 11, and a boy aged 9 – he said he knows the financial pressures of living “week to week” – “and I know what it’s like for everyone in Masterton in the same position”.

“I’m trying to do the right thing by my children, and the mayoralty is part of that.”

Colourful contenders in the running for Tararua mayoralty 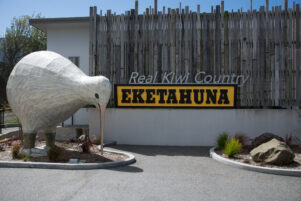 Eketahuna is a township in the Tararua district. PHOTO/FILE

Tararua Mayor Tracey Collis faces some colourful competition for the job in the coming election.

Pongaroa’s James Harold, 41, who with his brothers was a pioneer in hemp growing, is standing, as is freestyle motocross rider and engineer, Mitch McHardy, 31, of Woodville.

Frustration with council responses on several issues is behind Harold’s bid.

He says the world is changing, with an increasing focus on a clean, green approach that New Zealand is not living up to.

“I propose that the Tararua District Council be the first in NZ to stop the use of synthetic chemicals on public land within the district,” he said.

“This bold commitment will put Tararua on the map and attract investment into the region.”

McHardy, a half-brother of Kiwi freestyle motocross star Levi Sherwood, has ridden professionally in Asia, including performing the first backflip to win an international event in Bali, and said he had set up is own engineering firm building factories “for everyone from Whittaker’s Chocolate to Fonterra”.

He moved to Woodville from Palmerston North two and half years ago and lives off the grid in an eco-friendly home.

He is now keen to get into politics and sees the tilt at the mayoralty is seen as a good first step.

Only mayoral contenders and Southern Ward candidates have been included.