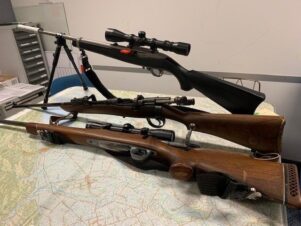 South Wairarapa Mayor Alex Beijen has faith in police to keep illegal cannabis growth under control but will be observing how things unfold in the wake of reports that police have put future aerial raids to bed.

New Zealand Police issued a report on Wednesday stating that, with the increased harm drugs such as methamphetamine were having in many communities, a one-size-fits-all annual aerial cannabis operation no longer represented the most appropriate deployment of police resources, resulting in the scrapping of funds for future operations.

Cannabis eradication operations had been successful in Wairarapa of late, particularly in South Wairarapa, where cannabis production had been vast.

Last year, nine people were arrested, and millions of dollars’ worth of cannabis, firearms, and thousands in cash were seized from properties in Featherston and Martinborough in an aerial police operation.

More than 700 cannabis plants and four unlicensed firearms were seized in the raid, and one person was charged with presenting a weapon at officers.

While Beijen said he was confident of police to do their job, he said the decision to scrap the national operation was questionable and may cause future harm.

“I have complete faith in the police [in Wairarapa] to enforce the law, particularly when it comes to cannabis,” he said.

“But coming from a central government view, I would be saying, ‘have you thought this through properly?’.

“[In South Wairarapa], it’s not only an issue in the towns but also rurally … so police do need to get on top of it. It would be a worrying trend if there was a lack of enforcing the law.”

“They have made this decision now, but they may have to deal with the consequences of not doing the searching in the future.

“I certainly will be watching carefully any harm this would cause in result of an increase in supply.”

Although New Zealand Police was culling its annual raid, a spokesperson said funding would still be available to districts that wished to prioritise the use of tactical support for the detection of cannabis plantations.

Wairarapa Police Area Commander Inspector Scott Miller said it was still in their plans to carry out cannabis eradication raids.

“As far as local Wairarapa goes, we will still carry on with our operations in relation to cannabis,” Miller said.

“We’re particularly big and focused on large cannabis grows, cannabis dealing, and we’ve got a different health-based issue towards cannabis use.

“So, it’s a case of whether we’ll be using traditional planes and helicopters or using the information we receive, but we’ll still be carrying on with those operations, and they’ll be locally-based, or district-based in Wairarapa.

“So, as far as I’m concerned, we’re not stopping any sort of cannabis operation.”