Logs float in water from the dammed Kaiwhata River and surround the woolshed at Kummerstein farm. PHOTOS/SUPPLIED

Two households evacuated on Friday after a slip at Te Wharau, between Gladstone and the coast, have experienced their fifth night away from their homes.

The slip created a large dam across the Kaiwhata River, with a lake extending more than 2.5km.

Water was on Monday going over the dam, with residents of two houses downstream advised to evacuate by local authorities after modelling conducted by scientists at GNS Science found there was a high probability the dam would fail.

Late Monday, Wellington Region Emergency Management Office management adviser Darryl McCurdy said advice from GNS Science was that a channel had formed and the flow of water was slowly eating into the wall of the dam. 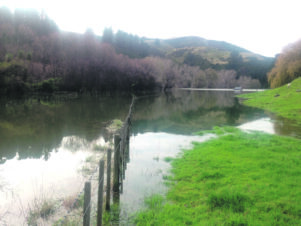 Water from the dammed Kaiwhata River covers the Kaiwhata Rd and paddocks.

“There’s a channel that’s being eaten into the dam and it’s going around the toe of the dam. It’s emptying water out through the lake, down the dam, into the river.

“But it’s not making much difference on the lake [level].”

McCurdy said there were several possible outcomes for the dam, with the chance that heavy rains would either clear the slip and bring the dam down, or contribute to more slips creating further blockages.

There are no plans to manually demolish the dam owing to safety concerns.

“It’s just too dangerous to put a digger on the dam to clear a channel or do anything like that,” he said.

McCurdy said there were still issues of potential flooding from the lake, though fortunately the forecast looked good for the next five days.

He and the Carterton District Council were working closely with the affected families to keep them updated about any changes.

Farmers downstream had been advised to avoid low-lying paddocks in case the dam broke unexpectedly.

Further updates were expected today when GNS Science was to return for further site testing.