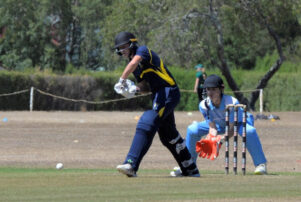 Samuel Payne highlighted his immense all-round potential with four wickets and 42 with the bat.

United had no answer to Kapiti Old Boys wicketkeeper-batter Jayden Miles, who scored a superb unbeaten century to lead his side to a first innings victory in the Coastal Challenge two-day final over the weekend.

The combined Wairarapa side had made a handy start after Kapiti won the toss and batted first at Paraparaumu Domain, claiming the first two wickets, both to 15-year-old Samuel Payne, with 40 runs on the board.

Then Miles and former Horowhenua-Kapiti representative Andre Halbert came together for the match defining partnership. When Halbert was dismissed, lbw to Payne, for 60, the pair had added 93 runs for the third wicket and swung the game firmly in the home team’s favour.

Miles was joined in another fruitful partnership of 72 for the fifth wicket with Sam Paterson [22], a sixth wicket stand of 40 with Carter Andrews [22], and 51 with Thomas Harris [15], and was unbeaten on 139 when the declaration came at 297-8.

He faced 238 balls and hit 16 fours and one six in his marathon match-winning innings.

United’s prospects of chasing down the big total looked grim from the outset, losing their first two wickets with just 11 runs on the board, and finishing the first day 34-3.

The loss of opener John McKenzie for 32 had United struggling at 50-4, before a 72-run fifth wicket partnership between wicketkeeper Andrew Taylor [30] and Jaco Vorster [54] gave them some hope, but quick wickets left United staring down the barrel at 147-7.

Wairarapa all-rounder Gus Borren and Payne threatened to turn the game around, adding 70 runs for the eighth wicket before Borren was run out for 47. Payne again highlighted his massive potential, eventually dismissed for 42, and the ninth wicket to fall.

Kapiti Old Boys were 89-3 in their second innings when stumps were drawn.