Burger King Red Star turned on their best batting performance of the season to qualify for the semifinals of the Coastal Challenge.

Red Star had to win their final round robin match on Saturday against two-time champions and last year’s runners-up, Paraparaumu, and they did so in convincing fashion.

Opener Jake Jonas and Brock Price both scored half centuries as Red Star amassed 247-3 in their 50 overs, a score that would prove too tough for Paraparaumu to chase down on a dry Queen Elizabeth Park Oval pitch which lacked pace and offered variable bounce. 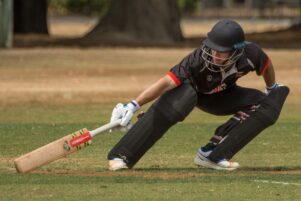 Richard French turns for a run against Paraparaumu.

Red Star won the toss and made a cautious start with Richard French [17] and Jonas putting on a partnership of 48 before French was dismissed in the 14th over.

Jonas took full advantage of being dropped by wicketkeeper Rory Lorimer in the third over scoring 84, off 125 balls, including 10 fours.

The 16-year-old’s confidence blossomed as his innings progressed and he looked a player of outstanding potential.

Jonas was finally out, brilliantly caught on the boundary, when going for what would have been his first six of the innings.

He had combined with Robbie Anderson [44] for a second wicket partnership of 92 and a third wicket stand of 55 with Price.

The hard-hitting Price was initially watchful on the tricky pitch but was never afraid to put away the bad ball.

His 73 not out came from 66 balls and included six fours and three sixes.

Paraparaumu started the chase aggressively, scoring 22 runs off the first two overs, but it didn’t take long for Red Star to grab their first wicket with Byron Gill caught behind off the bowling of captain Peter Sigvertsen in the fourth over. Jake Jonas plays a shot on his way to 84.

When the visitor’s best batsman, former Red Star player Kelsey Fahey, was caught by Anthony Sprowson off Jacob Osborne’s bowling for five, it was always going to be a tough battle back.

Lorimer, batting at six, showed some fight but lacked support. When he was out for 42, with the score at 125-7, that signalled the end, with the last four wickets falling within 10 balls.

Meanwhile, the game between Jackson Street Lansdowne and Whanganui Marist was not played, due to Marist’s commitment to the Central Districts national club championship playoffs.

It is understood Lansdowne won the game by default.