‘It’s sad for everybody’ 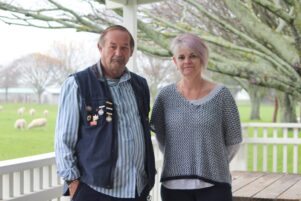 Deciding to cancel this year’s Wairarapa A and P show due to the risk of covid-19 was not an easy decision said society president Melvin Pike and secretary Catherine Lord. PHOTO/GIANINA SCHWANECKE

For the first time in 143 years, the iconic Wairarapa A and P Show held at Clareville will not be held because of ongoing concerns about covid-19 transmission and traceability risk, organisers say.

It was not an easy decision, Wairarapa A and P Show Society president Melvin Pike said.

“It’s about being responsible.

“This covid-19 pandemic has been hard on our members as a lot of them are older and more vulnerable.

“We want to look after our members and the community.”

Pike has been involved with the society for more than 40 years and said he was more disappointed than anybody.

“It’s sad for everybody.”

Normally held in late October, he said the event drew a lot of people from outside the district, with more than 10,000 people attending the Friday night event and another 9000 on the Saturday and Sunday.

“We have a family show. Last year’s show was fantastic due to the great crowd.”

The organising committee didn’t feel they had the facilities or capabilities to carry out contact tracing in case someone was found to have covid-19.

“We decided to do it early to let people know.

“We also didn’t want to be in the position of having to pull the pin a week or two weeks out from the event [if the country changed alert levels].”

She said the event would be going ahead next year though, and they were already planning to make it “bigger and better”.

The horse show, which attracts about 400 horses and their riders to the Clareville grounds, would still go ahead this year, as the registration process for the competition made it more manageable to trace if necessary.

The hoedown competition would also go ahead this year as a ticketed-only event for the same reasons.

Both expressed their gratitude to the community for their support of the event.

“It’s a small community but we get a lot of support from them,” Pike said.

“The businesses of Wairarapa have been really good to us and very supportive. It makes a huge difference.”

The Masterton A and P Show, usually held at the Solway Showgrounds in February, has drawn smaller crowds in comparison, prompting its organisers to rethink the way the event is run and establish a new group, Friends of Solway Showgrounds.