Is the pandemic blurring our focus? Where are you reading this right now? Is it hard copy or online? Where are your shoulders? In a race to reach your earlobes or in leisurely repose?

How close are you to the text? Are you frowning as if to imprint the page on your skull?

Now try and recall the last time you blinked.

If you are hunched like Quasimodo, an inch from the text with dry, itchy eyes, then you may be suffering from digital eye strain.

Pandemic-related digital eye strain is the latest in a long list of lockdown ills, the domino effect of increased screen time while everyone works and studies from home.

In a report, “The Hidden Impact of covid-19 Lockdowns”, Specsavers said there had been an increase in New Zealanders experiencing symptoms of digital eyestrain.

With the “regularity, severity, and impact of symptoms all increasing.”

Digital eye strain has increased alongside our dependence on screens. Still, the optometrists predicted that symptoms would markedly jump as the country went into level three and four lockdowns last year. 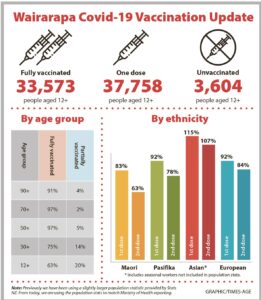 A second nationwide survey conducted in October this year illustrated precisely that.

In January 2020, the initial survey showed 86 per cent of office workers reported at least one symptom of digital eye strain. A year and a half later, that number had jumped to 93 per cent, said Specsavers.

Co-owner of the Masterton Specsavers and optometrist of 20 years, Dr Helen Haslett, said the store had seen a “definite uplift” in complaints related to computer use.

She said the survey results for the Wellington region, including Wairarapa, showed 79 per cent of respondents reported an increase in screen time due to the pandemic.

Almost two-thirds were experiencing symptoms of digital eye strain, she said, and of those, 77 per cent thought the symptoms negatively affected their productivity.

Age did not seem to be a contributing factor either, she said.

Although Haslett was not working from home, she said flitting between three screens at the office meant she required eye drops to soothe tired, dry eyes by the end of the day.

A problem, she said, with a simple solution.

Haslett said the eyes needed to blink about 15 times a minute, but people staring at their screens would often forget to do so. She suggested a post-it note reminder could help.

Haslett said blinking was also important because increased mask use had a drying effect on the eyes.

“Not that I’m advocating not wearing them, but the hot air comes up towards the face and dehydrates the eyes.”

Every 20 minutes, the eyes should take a break from the screen and focus on an object 20 minutes away for 20 seconds.

“The rule is important. We say it to everyone that comes in.”

More often than not, people were looking upwards at a close, too bright screen. An unnatural state for the eye, Haslett said.