Interest in Featherston’s small and tiny home development is growing after an information session in Hutt Valley on Saturday.

About 40 people attended and learned about the community development proposal which will include 30 homes. They will be small home and land sections on a land area of 1.06 hectares on Harrison St East.

Developer Ian McComb, of Brookside Developments, said the feedback had been “really good” and a lot of people wanted to be put on the waiting list for more information about when the sections became available.

“A lot of the questions were focused around the houses – what sizes, how many bedrooms, how many bathrooms, what house is going on each site,” he said.

“It’s obviously targeted at the smaller end of the property scale.

“We are aiming to put in a lot of sustainable features.”

McComb had initially proposed to build 120 small and tiny homes on the four-hectare section but his application to the South Wairarapa District Council was denied back in March.

The revised plan includes less houses, ranging in size from one to three bedrooms on a portion of the four-hectare block of land on Harrison St East, Featherston. 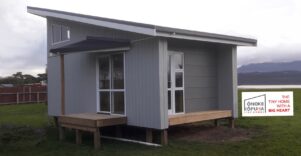 They will have a small energy footprint, and offer high quality construction including double glazing on lots from 120sqm to 275sqm.

Most of those in attendance were people aged40 and over, with some looking on behalf of their children.

“There’s quite a movement building in New Zealand,” he said.

He is following in the steps of; Earthsong in Auckland, Ohu in central Christchurch, and High Street housing in Dunedin.

“When we build small and tiny homes, we only need to build what people want.

“The development will have a shared communal space with a café and additional accommodation for visitors.”

The concept harks back to the days of small villages where everybody looked out for each other.

“The saying, it takes a village to raise a child is about a caring community,” and it’s that community feeling McComb is going for.

“At this stage, due to the downsizing, most of the community elements have had to be put on the back burner but I’ll be working out how to implement the community more.”

The application has been accepted by the council and McComb hopes the council will issue consents in July.

Site visits at the Harrison St East section are scheduled for July 18-19.