Teen on top of his game

At 15, Tremaine Rimene-Albrett was a national champion, and two years later he is an integral part of GasPro Douglas Villa’s move up the Capital Football Divisions. Times-Age sportswriter CHRIS COGDALE caught up with one of Wairarapa’s sporting stars

Sport is in Tremaine Rimene-Albrett’s blood. His father Patrick Harding-Rimene is the record points’ scorer for Wairarapa-Bush, having amassed 561 points over 70 games for the green and reds, represented the NZ Heartland XV, and is also a national representative in waka ama.

Rimene-Albrett has already made his mark in waka ama, winning the 2018 junior J16 500m title as well as several runners-up medals.

Unlike his father, though, the Year 13 Makoura College student has chosen a different path for his team sport and plays football for Douglas Villa, the club he joined at a young age.

He said it’s pretty hard to choose what sport he prefers, although his greatest success has been on the water. 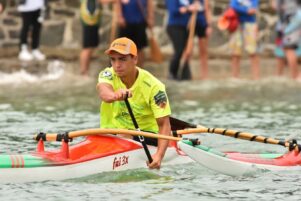 “Waka ama gives me different life experiences on different surfaces of water, and that gives me better confidence.

“I represented New Zealand through my club when I went to Tahiti in 2018,” he said.

“This year, I was highly likely to make the New Zealand team, but that got called off because of covid-19, but I’m passionate about both sports.”

Rimene-Albrett first played for Douglas Villa [then known as Magpies] as a 14-year-old and had his first full season the following year.

The team won promotion to Capital Four after going through the 2019 Local League season unbeaten, and Rimene-Albrett, who plays as a midfielder-striker, said he enjoys the intensity of the league.

“I found it a bit more up-tempo than the local league, but the physicality is pretty much the same.

“I just try and match myself to them, if not make the opposition match me but really it’s just the speed of the game is higher.”

Capital Four is known for featuring experienced players dropping back through the leagues and Rimene-Albrett said he enjoyed testing himself against them.

“I can pick out who are the experienced ones, and I just try and not let that get in my way. I try to use my skills to match them and to create something.”

A natural left-footer, Rimene-Albrett announced himself to the league in the first-round win over Western Suburbs, finding the back of the net with a near 50-metre screamer.

He has also carved out a reputation as a deadball specialist.

“The corners I always take them because of the left foot that I’ve got, and the freekicks are pretty much the same as well.

“I’m not shy to have a shot, I’ve been doing that for so many years, and when they connect and go in the net it feels great.”

Douglas Villa are unbeaten after four rounds, which has given Rimene-Albrett the confidence they can go all the way.

“If we go from the kickoff and can play with intensity and how we want to play then we should move up these ranks pretty easy.”

He did agree that he would like to have a crack at Central League.

“That would be a good experience. I love all that physicality and intensity and speed. I like to play like that. It would be real good if I can get to that level.”

As well as football, Rimene-Albrett plays rugby and basketball for Makoura College in the winter and touch and volleyball in the summer.

“I’m just trying to make the most of it while I’m young because I know when I get older it is going to be limited.”

However, he does not see himself taking rugby more seriously.

“Last year, I was thinking about whether I should go there because I was getting invitations to camps and whatnot, but I don’t really see myself going in that direction, especially with footy.”

Whatever sport the rising start chooses, he needs to look no further than his father for inspiration.

“I think to myself what he’s done for the community, for rugby and waka ama and I wanted to try and match or do better.

“It’s good because it pushes me and he pushes me also. What he does for me is good. He doesn’t mind what sport I play just as long as I’m happy with it.”