In Charles we trust The directors of Trust House attended along with trustees of the Masterton Community Trust and representatives from the Masterton Trust Lands Trust.

After the official welcome, Kaka spoke in Maori.

Affiliated to Te Arawa and Ngati Manawa, he has strong connections with the region having spent his young adult years here in the freezing works, forestry and electricity sectors, as well as making a name for himself as a rugby player.

His wife Maahi is from both Rangitane and Ngati Kahungunu.

Kaka said he always intended to return to the region.

Before this appointment, he was chief executive of Unison Contracting Services Limited, a position he held for 13 years.

Relationships manager from Unison Networks Danny Gough has worked with Kaka for over 10 years and was present to participate in the ceremony.

“Wairarapa is very lucky to have a man of this stature,” Gough said. “He is very good, but he is also caring.”

He warmly welcomed the new chief executive but made the point that covid-19 had hit the businesses Trust House operate hard. He said the balance sheet was still good, but all the assets and businesses would need good management.

“The company is very conscious it generates income from ‘difficult’ sources,” Kershaw said. “They are pubs, alcohol, gaming and community housing and they all come with challenges.

“I would personally like to see the renovation and redevelopment of our aged rental houses. And in the years to come I am confident we can increase the number of rental houses available.” 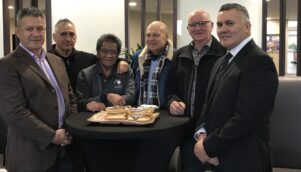 During morning tea Kaka caught up with some of his old mates, including from the rugby fraternity.

From 1981 to 1988 he played 61 games for Wairarapa-Bush mainly as a midfield back, and was good enough to earn New Zealand Maori representation and appear in an All Black trial.

“I am a Martinborough supporter and will be supporting the green and black this season,” Kaka said.

“Charlie’s the right man for the job,” he said.