The building which was formerly Turkey Red. PHOTOS/FILE

Greytown’s Turkey Red is on the market after the company which owns it went into receivership.

RMD bought the building in May 2018 and McNaughton announced the redevelopment of Turkey Red into housing units. 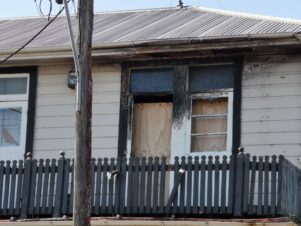 Some of the fire damage on the Turkey Red property.

The redevelopment was expected to get under way in early 2019, but a fire in the roof and the second storey of the building derailed these plans in February of that year.

After the fire, RMD was unable to secure the necessary insurance as required under the terms of the mortgage agreement with Wairarapa Building Society.

BDO Wellington has arranged for the property to be sold by real estate agent Chris Gollins, of Gollins Commercial.

Shephard said it was a great location for a future buyer.

“We have instructed an agent to market it, and it’s a wonderful development opportunity.

“We are confident of a good outcome.”