Hut left in a state 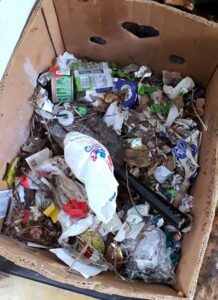 Totara Flats Hut, popular among Tararua trampers, went viral on a popular New Zealand tramping page, when Tania Seward posted a picture of the dire state of the kindling box [pictured right] – it got liked and shared more than 300 times.

At the time, Seward, an executive member of the Federated Mountain Clubs, was training with three others, and had just completed a four-hour night hike in preparation for an upcoming ultramarathon.

When they got to the hut, there was nothing there to make a fire, although they managed to scrape together enough to start one from the contents of their packs.

“We were the first ones to the hut, which is quite normal on a Friday night.

“And when you’re four-and-a-half hours walk from the road end, it’s not great to walk into a cold, dark hut and there just be a gigantic pile of rubbish.

“It was just really sad to see that the actions of fellow trampers and backcountry users meant that not everyone had a great experience when they arrived at the hut.”

Huts run on an honesty policy, from the booking system, to the cleaning and restocking after a stay – this was clearly flouted last Friday, leaving Seward initially unable to make a fire.

Alongside her photo, Seward said “this was the state of the kindling box when my friends and I arrived at Totara Flats Hut: full of cans, wrappers, bits of broken candle, milk cartons, and even a sock.”

The following morning, the foursome went out to replenish the hut’s supplies: something that should have already been done by the prior occupants.

“The next day, we went out and spent an hour finding dead wood nearby, chopping it up and drying it out so the next person would have a nicer hut experience.”

A Department of Conservation spokesperson said rubbish should always stay with the tramper, and must be taken to a bin, or taken home and disposed of correctly.

“When you plan to head out into nature, be ready to carry your litter with you.

“When heading into the bush, you’re likely to travel through remote areas where it might be a while before you can find a bin.”