Hospitality and accommodation providers across Wairarapa are cautiously raising a glass to this week’s relaxation of level 2 restrictions.

With Auckland now at level 3 and the rest of New Zealand adding that at level 2, many venues can now increase indoor numbers to 100, up from 50. 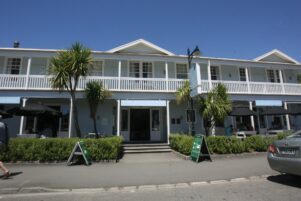 Owner of the White Swan Hotel in Greytown Nick Rogers, said the move would be welcomed, especially by larger venues. He said public safety came first.

“It’s good news. It’s going to make things a lot easier,” he said, saying it was important to follow the rules.

Rogers said that while it would take a few weeks for people to get used to the new level 2, the change would help his venue move towards capacity.

He was expecting to stay at level 2 for a while.

He said people were still travelling to the region, especially from Wellington and the hotel was fully booked every Saturday for the next six weeks.

John Richards and partner Theo Wijnsma own Featherston’s Royal Hotel. They said the move would be good for the region and help the hospitality industry.

“Business resuming under the new normal has a big impact on Wairarapa tourism and builds confidence.

“Limiting gatherings to 50 can be hard to manage, especially inside venues. The increase opens the doors to small weddings, birthdays and other celebrations.

“People can book their function with a lot more confidence,” they said.

“We are looking forward to seeing Wairarapa tourism come back, especially for summer. To see businesses being supported during different alert levels is heartwarming for all small businesses owners.”

Anh Le, manager of Union Square Bistro and Bar in Martinborough, welcomed the move and said they had already noticed an uptick in business.

“Last weekend, everywhere was full. There was no parking around The Square. It was like summer,” she said.

“The increase in numbers will make a difference, especially at the weekend.”

Le said the restaurant could accommodate about 15 extra people now.

“We are looking forward to the summer. Fingers crossed,” she said.

Destination Wairarapa marketing manager Barbara Hyde said easing the restrictions would give tourism and hospitality businesses more confidence and enable them to scale up.

“We anticipate an increase in visitors anyway. Spring and the warmer weather are always an incentive for people to come to Wairarapa,” she said.

“There is also daylight saving starting this weekend and the school holidays kicking in the following weekend.”

Hyde said upcoming events such as this weekend’s Tulip Festival at Longbush Cottage, drag racing meetings, the Pukaha Wairarapa Garden Tour and Toast Martinborough were expected to be popular drawcards.