Horses on the loose Workers will soon be at a new Featherston subdivision to put in power, phone lines, and drainage, but they will likely have to dodge wandering horses to get there.

For many years, Lyon St landowner Janine Price has stopped her car to get her neighbour’s horses off the road and back into the owner’s property.

With the development going ahead, she was worried the horses would get hit by a truck.

“The horses are grazed on a number of berms and escape from the tape and gallop across the road,” Price said.

“This is a traffic hazard, which is dangerous for the horses and drivers alike.”

Price allowed the horses on her paddocks for a while but her relationship with the owner had deteriorated, she said. 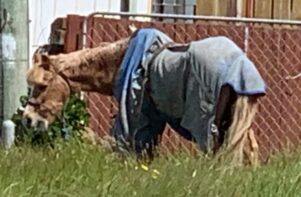 Price said several neighbours were also “fed up” because the horses got loose and then ate their hedges and plants.

Over the past few years, Price had emailed South Wairarapa District Council and reported when the horses were wandering on the road to its by-law officer. But the situation remains unchanged.

Price said the situation was “out of hand” and did not feel SWDC was doing anything about it.

“In fact, I was told the council’s contractor, Citycare, took the owner to Farm Source to get the horses feed.

“But the horses are in bad shape, so I have contacted the SPCA.”

SPCA said the welfare of the animals was its primary concern in the case.

“The horses are under current veterinary care and we will continue to work with equine experts to assist us. The next steps in this case will be determined by the expert’s report,” central region general manager Ros Alsford said.

South Wairarapa mayor Alex Beijen had emailed Price after her engagement with him at public forums and her Facebook posts this week.

“We are attempting to find the best possible solution for the issue as opposed to being heavy handed,” Beijen said.