John McKenzie relished his drop down the order with an impressive 58. PHOTOS/FILE 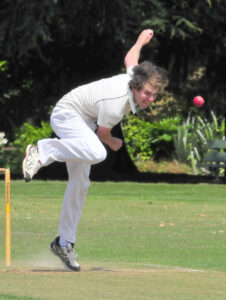 The medium-fast bowler captured six wickets for 35 runs from 19 overs to help bundle Whanganui out for 146 in the first innings, and then backed that up with 4-57 in Whanganui’s second innings of 193-9.

Hook gave Wairarapa the perfect start after they won the toss and decided to bowl on the normally placid Victoria Park pitch, having opener Matthew Simes and former New Zealand international Andrew Penn dismissed with only eight runs on the board.

“[There was] a bit more juice than there normally is there, but because we had played club cricket there last week and the ball just came on to the bat, and we were also a bit late to the ground, so we thought we’d just get out there and get it done,” he said.

“It’s the best time to bowl at the start, and we knew it would give us the best chance of bowling them out.”

Whanganui stumbled to 20-4 and struggled to put partnerships together, the best being a 34-run fifth-wicket stand between William Hocquard and Hadleigh O’Leary.

Some lower-order hitting by Chris Sharrock, with 46 off 44 balls, added some respectability to the home side’s total, only for the wicketkeeper to fall victim to the rarely seen hit wicket dismissal.

“I bowled him a few short ones, and one went just over his left shoulder and he went to pull it and swung too hard and the bat slipped off his hand and smashed his off stump,” Hook said.

“The bounce just got big on him and he just lost balance, and that was the one to get the ‘five for’ as well.”

Wairarapa were in early trouble in their first innings with two of the most experienced campaigners, opener Robbie Anderson and first drop Jared van Deventer, back in the pavilion for only two runs.

“We were a bit nervous there, but that was what we had done to them in the first innings, so we knew if we could get through that, it would be all right after that,” Hook said.

“It was just one of those pitches that if you put in with the new ball you would get a bit, but it was generally pretty flat.”

Wairarapa’s prospects of building a big first innings lead looked grim at 93-5, before half-centuries to John McKenzie [58], who had dropped down the order after previously opening, Jack Forrester [58], and Gluck [56] had them through to a total of 319.

“Everyone was happy for the likes of John, and Jack, who had been struggling big time, and with Paddy coming in and getting runs,” Hook said.

“John looked seriously at home, and he looked like a different player. It brought more to his game, and he was a lot more confident in the field, it was a very good move.”

Whanganui showed more fight in their second innings, with number four Max Carroll scoring a patient 60, and Sharrock, and medium pacer Fraser Kinnerley both scoring 36, in the total of 193-9.

That left Wairarapa 21 runs to win outright, which openers Anderson and Jake Jonas achieved in the third over.