Relay teams doing their part for the Cancer Society

Libby Trafford is very familiar with the devastation cancer can bring.

Last week, the Whaiora office manager shaved her head in support of this weekend’s Relay for Life Wairarapa event, in memory of her friends and family whose lives have been forever changed because of cancer.

“I lost my very best mate to cancer and my sister-in-law to lung cancer even though she had never smoked,” Libby said.

“Then my husband who was having a knee replacement had a chest x-ray as part of a pre-op check and was told he had lung cancer.

“Fortunately, because of early detection, he had major surgery which saved his life.

“But the diagnosis was crushing.

“And who knows, it could be me tomorrow.”

Libby said the decision to shave her head was a simple one.

“I am not someone who likes to make a spectacle of myself, but I did it to raise funds for the Cancer Society who work so hard to help those who need support.

My hair will grow again – it’s nothing like losing hair because of chemo.

“It’s a token really but a symbolic one.

“It’s a demonstration of support to all those in our community who have either had cancer diagnoses or have supported those who are on their cancer journey.” 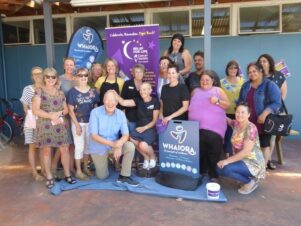 Steve Chamberlain is a friend of Libby’s and a colleague at Whaiora.

He was diagnosed with prostate cancer four years ago and now it is advanced.

“I am on a slippery slope and you never know which way it will turn.

“I trust my clinicians and I have had outstanding care.

“You have to keep one foot ahead of the other all the time and there are new treatments coming on stream.

“The cost of treating me with drugs is massive but they stall the progress of the disease.

“However, there is always hope and Relay for Life is all about hope.”

Steve believes prostate cancer is a poor relation to breast cancer because there is no national screening programme and many men are not aware of the PSA test available.

“Yet it is the most commonly diagnosed cancer in men.

“He doesn’t want Whaiora to be the ambulance at the bottom of the cliff and for other men to suffer needlessly.

“I want to see more awareness of environmental issues, screening and early detection.”

The Whaiora team is getting behind Relay for Life by fundraising through raffles and Libby’s head shave.

They have raised almost $3000 so far and donations have come from near and far through Facebook posts.

All donations support the work of Wairarapa Cancer Society who support those who are suffering.

“I love the Cancer Society’s kaupapa and the fact that the money raised stays in Wairarapa,” Libby said.

“The local Cancer Society needs all our support.

“We never know when we may need them.

“We just never know when we may need a bit of extra help in our lives, or when something may turn ‘pear-shaped’.

“Who knows who may need help – I’m paying it forwards, perhaps.”

Relay for Life, one of Wairarapa’s biggest charity events, takes place at Clareville Showgrounds from March 16-17.

Hundreds of people will be participating in the Cancer Society’s Relay for Life, which involves an 18-hour relay around the circuit.

To donate to help fight the battle for cancer sufferers and survivors, visit wairarapa.relayforlife.org.nz/event/RelayForLife-Wairarapa-2019/sponsor_a_friend.