Former All Black Zac Guildford scoring a try for Greytown in this year’s club championship. PHOTOS/FILE

Last week’s three-part series of top 21 achievers or achievements of the past 21 years, attracted some interesting discussion, such as what about this person, or that achievement, or why do you put them in that order?

In the end. it is only my opinion, and you can agree or disagree. It was all about getting people thinking and talking about our region’s sporting history.

For a small population our Wairarapa sports people and teams regularly punch way above our weight, and we should celebrate those successes.

So, it’s appropriate that I look at the honourable mentions, those that did not quite make the top 21, but have been outstanding in their own right. 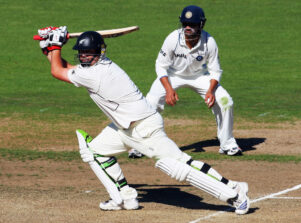 Jesse Ryder plays a shot in his innings of 201 against India in 2009. PHOTOS/GETTY IMAGES

Two of the obvious ones are international cricketer Jesse Ryder and former All Black Zac Guildford. Both left the region in their primary school years and still have links here, but both have had their off-field battles and never realised their full potential.

In 48 one-day internationals, the hard-hitting left-hander scored 1362 runs at 33.21, including three centuries.

Guildford first came to national prominence in the New Zealand team that won the 2007 Under-19 world championship. He then won world titles with the Under-20 side. He made his All Blacks test debut against Wales in 2009 and was part of the 2011 World Cup winning squad. He also won a gold medal in sevens at the 2010 Delhi Commonwealth Games.

Guildford played for Wairarapa-Bush in 2016 and is a member of the Heartland squad. 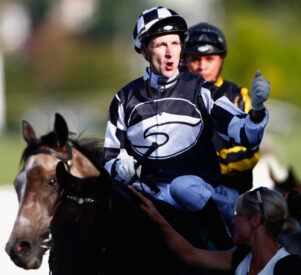 Leith Innes has been one of New Zealand’s leading jockeys of the 21st century.

In a career stretching back to 1994, the son of Opaki trainer Gerald Iness has ridden 1506 winners, including 170 group and listed races, for more than $34 million in stake money.

Sefo had been competing at the top international level for 15 years, but while there had been several minor placings, this was his first world title at the age of 45. Sefo also represented New Zealand in transtasman tests over several years. 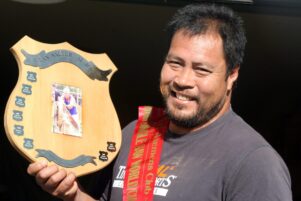 Gibbs, at 24 the youngest participant in the open 83kg class, finished second behind Ecuador’s Jose Castillo for the overall prize after winning the gold medal in the bench press, the silver in the squat, and the bronze in the dead lift.

Wairarapa belied their underdog status to win a bronze medal at the national intercentre championships in Wellington in March this year.

The team made the quarterfinals for the first time and defeated Manawatu. That set up a semifinal against Auckland and Wairarapa pushed their international-laden opponents all the way, only going down off the very last bowl. Spike Taylor racing at Taupo in 2020.

Masterton won the prestigious Duncan Cup for the first time in the club’s history in 2019 and completed the double in 2020.

Masterton beat New Judgeford 10-5 at Royal Wellington to win their first title. They followed that up by beating Shandon 9-6 in very wet and windy conditions at Paraparaumu Beach in 2020.

Spike Taylor, the winner of four national motorcycle sidecar championships, and Harcourts with 16 premier one netball titles, including 10 of the past 11 championships, are also honourable mentions.