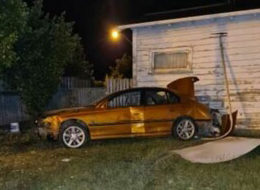 A car crashed into the bedroom of a Masterton flat early on Tuesday morning. PHOTOS/SUPPLIED

‘He should not have been driving’

The occupants of a Masterton house say they are lucky to be alive after a person drove over a roundabout, hit multiple street signs, ploughed through their fence and a billboard on their property, and eventually came to a stop in the wall of their home.

Emergency services responded to the crash on High St, Kuripuni, at about 1.30am on Tuesday. Jonathan Atherton was asleep when he was woken by the sound and impact of the car crashing into his flatmate’s bedroom.

“We’ve had renovations, so I thought something had gone wrong. I actually thought our back chimney had fallen over in my flatmate’s room,” he said.

“I went down there and I asked him ‘Are you all right, bro? What was that?’.”

Atherton’s flatmate initially thought there had been an earthquake.

“He was just stunned. I thought he was trapped – I went to barge into his room, and because his bed had been shunted across, it had trapped the door. It made me think even more the chimney had fallen down,” Atherton said.

“That’s when he said, ‘I think there might be someone in our front yard’. He didn’t realise [there was a car in the wall] because it was dark.

“I went outside, and that’s when I saw him stumbling around.”

“That was a shock to me. I walked out there and saw a car, a massive hole in my fence, people milled around.”

Atherton alleged the man, thought to have been driving the car, was intoxicated.

“I knew he was drunk. I could smell it – his car reeked of alcohol.”

“All he kept saying was ‘I’m lucky to be alive’,” Atherton said, “Come on, really? There’s a dude right there a metre away from your car mate.

Atherton said his flatmate was so shocked that he was unable to talk to police.

He had moved his bed to the other side of his room, away from the wall the car came through, just two weeks earlier.

“It could have been a fatality, I tell you. His head was right where that big imprint is,” Atherton said.

“It could have been a lot worse.”

A visitor who was staying at the house said she had panicked.

“I had just assumed his bed was still right up against that wall and I was freaking out,” she said.

Two metal poles, which had held the billboards on the property, had been knocked over. One had speared the wall of the bedroom.

“That billboard pole that went through the wall, if that had gone down lower, it could have kebabbed the dog and him.”

Atherton said it was lucky the billboards were there to slow the car down.

“God knows how fast he was going, he must have been going quick,” he said.

“It was pretty severe man, it was so fast. It started on the other side of the roundabout, and he hit three or four signs before he got to us.”

The signs had been replaced by Masterton District Council early the next day, he said.

“We were just so lucky.

“He should not have been driving, straight up, he could have killed anyone that night.”

A 43-year-old-man appeared at Masterton District Court on Tuesday, charged with resisting police and escaping custody.

He had been taken into custody for breaching bail conditions, which specified that he was not to be found intoxicated in public.

Police were yet to press charges relating to the crash, as they were awaiting the results of a blood-alcohol test.

The man’s lawyer said he accepted the test was likely to indicate alcohol consumption and that he was likely to plead guilty when charges were laid.

Police opposed the man’s bail, submitting that he may interfere with witnesses in the case.

The presiding judge bailed the man to his emergency accommodation under a 24-hour curfew, except for the purpose of attending a meeting related to court, counselling, probation, Pathways, Work and Income, or his doctor.

He was not to consume or possess alcohol and would be subject to random alcohol tests and searches by police.

The vehicle had been written-off.

Atherton said he had been living at the house for three years.

“What’s funny is, when I moved in, my first worry was: has anyone been through the fence?”

He had been told a vehicle had once gone through the back fence of the house “a long time ago”, but the house itself had not been hit.

“It took three years. Now I’ve seen my first one, and I’m happy not to see another one.”