Alan Fielding with the box of treats and military trinkets he’s managed to arrange for Tony Hudgell who lives in the UK. PHOTOS/ARTHUR HAWKES 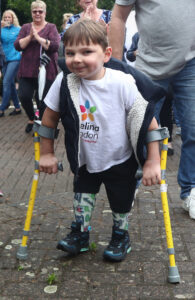 Tony Hudgell, 5, who has been walking to raise money for a children’s hospital. PHOTO/GETTY IMAGES

Alan Fielding read about the case of Tony Hudgell a few years ago and was appalled. Hudgell is a British boy from Kent who had a double leg amputation in 2017 after severe abuse from his parents, now both imprisoned.

Today, Hudgell is five years old, and has been inspired by the work of World War II veteran Captain Tom Moore, who raised over $65 million for National Health Service charities in Britain, by walking around his home during lockdown.

Hudgell has also been walking, with the aid of his crutches, to raise money for Evelina London Children’s Hospital. So far, the boy has raised over $3m. It’s been reported that the young Hudgell is developing quite an interest in military history, after his conversations with Captain Moore.

Fielding was moved by the story, and his own experiences with ‘diffability’. His son Kris  died, aged 27, from spina bifida. As the father of a son needing care for over a quarter of a decade, it’s a term he
uses instead of ‘dis-ability’, which highlights that people with these complications are different, but not lacking anything.

“This is trying to do something kind for him, give him some things that he might like,” Fielding said.

“That boy’s got a really hard road ahead of him, I’ve seen what it’s like.” 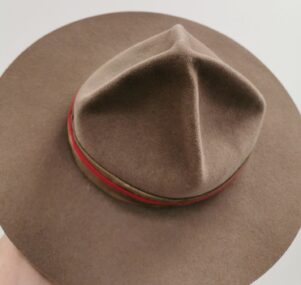 The reason they call the New Zealand WWI campaign hat a ‘lemon squeezer’.

Fielding is now trying to arrange for a bumper box of ANZAC military history, along with a few national treats and surprises, to be shipped to the boy through the Queen’s Own Royal West Kent Regiment.

Fielding has been in touch with former Defence Minister Ron Mark about the care package, to which Mark has donated some prized [and very valuable] military medallions. The National Military Museum has also donated some historic badges and buttons that were used by ANZAC soldiers.

The majority of the contents are coming from Fielding, and includes a Queensland Light Horse slouch hat and a New Zealand ‘lemon squeezer’ hat both worn in the ANZAC campaigns in WWI.

The slouch hat contains a fresh emu feather that Fielding had to find from an emu breeder, as the old one had perished. The regiment were the only one allowed to wear emu feathers in their hats.

Hudgell will also [hopefully] be receiving a bumper stock of goodies like pineapple lumps, ANZAC biscuits, Tim Tams, and Kea cookies. A furry kiwi, a fluffy penguin, and a light-up cushion are also included. 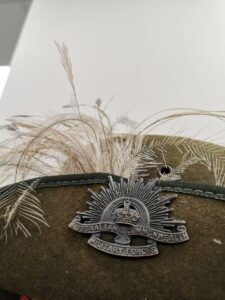 As well as historic trinkets, Fielding has added several fun books and learning resources, related to military history, and that of Australia and New Zealand.

He said the number of people who had contributed to the care package had been “staggering”.

The next step for Fielding will be to send out the box for shipment, which is something he’s hoping to get done sooner rather than later.