An historical document bound for the landfill has returned home to Tauherenikau Racecourse.

The 1895 deed of lease to the Wairarapa track will be on public display for October’s race meeting. 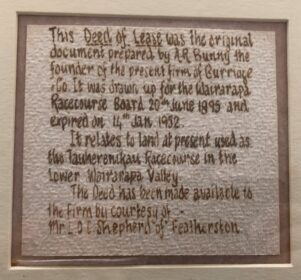 The 1952 detail describing the 1895 deed for Tauherenikau Racecourse.
PHOTO/SUPPLIED

The paperwork was rescued from the refuse by a sharp-eyed Martinborough resident.

“I think it was either on someone’s wall, or sold, or just put in a basement,” Beijen said on Thursday.

“They were filling a very large skip and this was on its way out, so I grabbed it.

Meeting Emms had jogged his memory.

“One hundred and twenty-four years later, it comes home. It’s nice to know it’ll be back in public view rather than in someone’s garage or basement,” Beijen said.

The deed was prepared by Masterton solicitor AR Bunny. It was signed by lawyer HS Izard and the then club president, William Bidwill.

When the lease lapsed in June 1952, the document was donated to the Burridge and Co law firm by Featherston man, L Shepherd.

The course has been the venue for races since 1874, 10 years after the Wairarapa club was formed.

The track is also now the venue for Masterton Racing Club events.

The iconic racecourse was one of 28 recommended to remain open in last year’s Messara Report into the state of New Zealand tracks.

The document will go on display during the Wairarapa Racing Club’s meeting on October 10. The meet is the first of a bumper summer season for the club.

But several events are scheduled. These include the popular New Year’s Day and Waitangi Day meets, and the annual Country Music Festival.

Alterations to the campsite and motorhome area in November will increase the number of accommodation spots.

Consents were being sought for further events in early 2020.