A historic homestead that lies in between Lake Wairarapa and Lake Onoke is on the market.

Papatahi homestead was built in 1905 on a sprawling country estate that overlooks the Tararua and eastern ranges, 30 minutes from Featherston.

The 6.2ha section was originally part of the giant Waiorongomai block taken up by Charles Matthews in 1855.

The block was later subdivided among family members and Papatahi was taken over by Charles’ grandson, Harold.

Papatahi homestead remained in the family until it sold to the late Joy Mebus (nee Corleison) in the late 1990s.

Mebus, a former Solway College pupil and classical music enthusiast, added a second storey to the homestead to make more room for friends and family, with her sons being pioneers of grape growing in the East Taratahi area.

The five-bedroom colonial-style house has been well maintained and is in “excellent condition”, featuring a library with floor-to-ceiling shelving, a wine cellar, and a timber panelled “great room” in which galas and weddings have been hosted. The original character of the home has been retained, while updates like central heating and a spacious eat-in kitchen have added modern comforts to the grand building.

With a rateable value of $1,480,000, the property off Western Lake Rd also features a restored, self-contained cottage.

Historian Gareth Winter, of Wairarapa Archive, said the garden was designed by Alfred Buxton, the “nations paramount landscape designer” primarily during the 1920s and 1930s.

Winter said Buxton designed a number of gardens for big Wairarapa homesteads, that often featured weeping elms and pergolas with wisteria, which Papatahi has.

Harcourts agent Brady Bingham, of Hamill Realty, said after 20 years in the same family came the opportunity to become the new owner of a “unique piece of history”.

“The property has been a cherished family home. Joy had it renovated lovingly and without any expense spared, but the family are ready for it to find its next custodians.”

Bingham said while the property was no doubt on a grand scale, it was “also quite cosy” and offered versatile living.

The property, which can be viewed by private appointment, is being sold by a deadline sale, which closes at 4pm on November 29, unless sold prior. 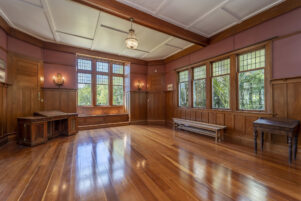 The ‘great room’, in which weddings and galas have been held over the years. PHOTO/PROPERTY TOUR NZ