Trade Me says a shortage of candidates is driving wages up. PHOTO/FILE

Where are the workers?

With unemployment at a record low and demand for workers increasing, employers are reporting serious difficulty finding skilled candidates.

But while employees reap the benefits of the labour shortage with wage increases, pay in Wairarapa lags behind the national average.

The unemployment rate dropped 0.7 per cent to 3.4 per cent in the September 2021 quarter. The number of unemployed people across the nation dropped 18,000, leaving 98,000 unemployed.

“The fall in the unemployment rate is in line with reports of difficulty finding workers and high labour turnover, and continued travel restrictions on international arrivals, which put pressure on domestic labour supply,” Collett said.

Her assessment echoed the observations of Wairarapa recruiters and contractors.

Drake Masterton recruitment consultant Laura Lewis said Wairarapa was facing the same situation as the rest of the nation. Drake managers in all regions had reported difficulty in finding skilled candidates. 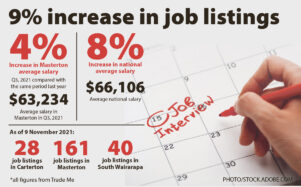 “There are a tonne more jobs because all the seasonal work kicks off as well – the likes of honey companies and factory work,” she said.

“They’re all ramping up for the Christmas season, so there are a lot more jobs out there for people, but people have to be open to working those kinds of jobs.”

“It’s the same as last season – we need staff.”

For the past 14 years, Beary had recruited workers for about 20 different vineyards.

In a regular season, before the pandemic, she would have about 50 workers on her books. She currently had half that number.

Beary relied on a stable team of Thai workers based in Martinborough, and in the past, backpackers had filled any gaps in the workforce.

She said some backpackers had remained in New Zealand and were available to work even during the most recent picking season.

However, she said the vast majority had now returned home.

“Now, I want to look for good local workers, but there’s not a lot around.”

This quarterly increase came primarily from women, with the largest increase on record of 39,000 or 3 per cent.

“While employment growth was strong for both men and women, the number of women in employment saw the largest quarterly growth in the series,” Collett said.

Lewis said the trend of more women entering the workforce was also true of Wairarapa.

“We’re seeing a lot of businesses looking outside the box and changing their shift patterns to suit the needs of the likes of mums or solo parents – parents that need to work just in school hours,” she said.

“There are a lot more women coming through our doors looking for that kind of work now.”

Meanwhile, Trade Me analysts said a shortage of candidates was driving wages up.

“Wage increases come down to employers having to reach deeper into their pockets to combat current market conditions,” Trade Me jobs sales director Matt Tolich said.

“Paying more is proving to be an effective way to attract talent in the increasingly competitive market. Employers are clearly forking out more to lure and secure talent amidst the widespread shortages.”

According to Trade Me figures, in the September quarter, the average salary in Masterton reached $63,234, an increase of 4 per cent compared with the same period last year.

Meanwhile, the national average pay reached an all-time high of $66,106 in the September quarter, an 8 per cent jump compared with the same period last year.

Lewis said regions such as Wairarapa had not seen as much of a pay hike as big cities.

“We haven’t seen it at this stage, but there is always the potential for the demands of candidates to push wages up faster.”