‘Better Eggs’ to come out of merger

The Commerce Commission has received a clearance application from three national egg producers, one based in Masterton, that were seeking a merger, to combine egg production and wholesale supply. 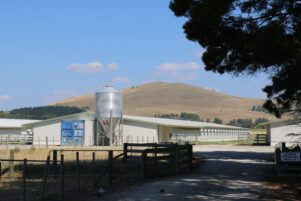 Heyden Farms supplied caged eggs, barn-laid eggs, and free-range eggs from its production facilities in Waikato and Bay of Plenty.

In their application to the commission, the three parties acknowledged that big changes were coming to the egg market after the phasing out of traditional caged laying, which would be prohibited in New Zealand by 2022 – this was thought to have a knock-on effect to the market, making a previously premium product [cage-free eggs] less premium, pulling up the market price of eggs.

The landmark government decision in December 2012 outlined a new welfare code for laying hens, which prohibited the battery cage.

Colony cages were approved as the new caged system to replace them.

The larger colony cages have been promoted as more furnished and relaxing for the birds, because the hens are provided with perches, a small rubber scratch pad and a nest box. However, animal welfare charity SAFE [Save Animals From Exploitation] said that “while these enrichments may sound good on paper, the reality is far from it”.

The Egg Producers Federation estimated that 40 per cent of current production was carried out by the conventional cage set-ups that were due to be phased out in two years.

As part of the merger, a new holding company would be formed called Better Eggs Ltd, using a share swap from the three merging companies, which would allow a unification of production and wholesale supply.

In their application, the parties identified Henergy’s “scale in egg production, national distribution, and expertise in cage-free egg production”, which could indicate that the impetus for the merger was on planning for a future free from caged laying.

When McDonalds switched exclusively to free-range eggs from caged eggs in 2016, they were purchasing nine per cent of all the free-range eggs in New Zealand, and new farms were established to serve the need.

The majority of eggs purchased in New Zealand come from the cages that will be outlawed in 2022 – a large proportion of these eggs also went to lower-income households, a statistic which has also called into question the sales volume of eggs in the next few years, if this economic group were to be priced out of regular egg consumption.

Another side to the cage-free debate was that, in removing the diet option of cheap eggs, poorer people would be deprived of a healthy protein source, while wealthier people could take on the higher cost.

Over the past few years, several egg farmers have actioned their own transition period, swapping old cages for the larger colony cages, which would still be allowed after 2022.

A decision on the merger of the three companies was expected from the Commerce Commission on September 18.