A walker stops to take in the view on a walk through Taratahi/Mt Holdsworth, courtesy of Live Like The River Flows. PHOTOS/SUPPLIED

A Wairarapa-based charity is helping the community reconnect with the natural world – and transforming mental health. ERIN KAVANAGH-HALL reports.

He settled on Live Like The River Flows, a nod to O’Donohue’s poem “Fluid” – comparing human existence with the flow of a river as it heads out to sea.

“Each corner the river turns is different, it doesn’t always see what’s coming up ahead – and it navigates obstacles,” Woodcock said.

“If there’s an obstacle in its path, it either moves around it, runs over the top of it, or wears it away.

This philosophy is central to Live Like The River Flows: a charitable trust which aims to nourish mental health, aid recovery and resilience, and help protect ecosystems through engagement with the natural world. 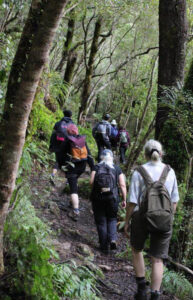 Founded by Carterton-based Woodcock in 2020, Live Like The River flows provides guided ngahere (forest) walks, hikes and workshops throughout the Tararua and Remutaka Forest Parks, as well as community nature reserves.

On the walks, Woodcock, alongside a team of volunteers, acts as a guide (with consent from the Department of Conservation) along the forest tracks – offering education on the area’s specific history, as well as on the importance of the ngahere to Wairarapa, and its role in our well-being.

Woodcock said the core purpose of Live Like The River Flows is to help re-establish a connection with nature: an inherent part of the human experience in the ancient world, which has been disenfranchised by centuries of colonialism and capitalist systems.

The kaupapa of the trust is based on te ao Maori, the early European principle of an interconnected world, and Te Whare Tapa Whā – Sir Mason Durie’s model of mental health, which includes physical and spiritual health in the four pillars of mental well-being.

The trust’s work is also heavily informed by scientific research – which has found that even brief exposure to natural settings can have a positive impact of mental health.

“When we’re deep in the ngahere, on a beach, or by a river, we feel a change,” Woodcock, also the trust’s chairman, said.

“We enjoy the silence, we notice our surroundings, our blood pressure reduces, and we feel less anxious.

“That connection and communion with nature is innate within us – and it’s our goal to help people find their way back to that.

“The natural world isn’t just a backdrop – it’s an active participant in our well-being.”

Woodcock has been passionate about conservation and nature since his youth, when he and his best friend, living in Upper Hutt at the time, would travel to Wairarapa to fish in the Ruamahanga River.

He re-established the Wairarapa branch of the Green Party after it had been in recess and stood as the Wairarapa representative candidate for the Party in the 2008 General Election.

More recently, Woodcock was chairman of Dam Free Mangatarere, an incorporated society set up to oppose the Wairarapa Water Use Project’s proposal to dam the Mangatarere River. He is also passionate about social justice, which has been reflected throughout in his career – from being involved in anti-nuclear campaigns in the 80s, to his work with the New Zealand Federation of Voluntary Welfare Organisations, to his current role as a union organiser with the Public Service Association.

For Woodcock, social and environmental justice go hand in hand – and this infuses his work with Live Like The River Flows.

“When we are disconnected from nature it becomes easier to destroy,” he said.

“But when we reconnect, nature becomes it easier to protect – and we learn that nature is not there just to serve us, and we are no more important than a river, an animal or a tree.”

Through the work of the trust, Woodcock aims to provide education on the Maori worldview of the natural world – that everything within nature is interconnected – as well as helping Pakeha find connection by learning about their own history.

For example, ancient Celtic tradition had a strong connection with nature – with waterways and trees revered as spirit beings and givers of life.

“They had that connection to a force greater than themselves – we see that in their rock carvings and stone circles,” Woodcock said.

“But, largely thanks to Roman occupation and Christian traditions (of dominion over land) the connection was lost.

“The aim is to help people find that sense of belonging, by drawing on their own roots and culture.

“It’s important we acknowledge tikanga Maori – but without, as Pakeha, appropriating or colonising it.”

The healing properties of nature, Woodcock said, are also strongly backed by science.

For example, studies have shown that views of the natural environment from a hospital window can expedite recovery from surgery – and that green spaces in neighbourhoods are correlated with healthier, more connected communities.

The Japanese practice of shinrin-yoku, or “forest bathing” (spending meditative time in a forest) has been found to reduce depression, anxiety, cancer and strokes.

Woodcock said one of his most rewarding experiences with the trust was guiding a group of mental health service users on a nature walk – where he witnessed some lifechanging experiences.

“People had some amazing transformations.

“They couldn’t explain why – but, after spending time in the ngahere, their mood lifted and they felt better within themselves.

“It was inspiring and moving.”

Woodcock hoped to continue working with mental health providers in Wairarapa, as well as businesses and community groups.

One of his favourite places for guided walks, he said, is Fensham Reserve in Carterton – alive with birdsong, and home to 800-year-old rimu and kahikatea.

“They would have been just saplings when Maori first arrived.

“We are so blessed in Wairarapa to have access to these spaces.”