Hawke’s Bay too good for Korus A superb all-round performance by Kate Sims was the shining light in the Southey Sayer Wairarapa Korus’ heavy loss to Hawke’s Bay in the Mike Shrimpton Trophy on Sunday.

Kate Sims took five wickets for 31 runs off seven overs in Hawke’s Bay’s impressive total of 224-7 off 40 overs and then top scored with 39 in the Korus’ disappointing innings of 111.

The match at Cornwall Park, Hastings was otherwise dominated by Hawke’s Bay batter Kelly Rangi, the daughter of former Wairarapa representative from the 1990s, Basil Rangi.

Coming in at first drop, the former Central Hind dominated the bowlers from the outset to score an impressive 88 off 86 balls, including 16 fours and one six. 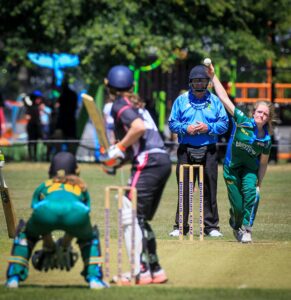 Rangi combined in two significant partnerships, 98 with Briar Cloake [38] for the third wicket, and then 57 with Flora Devonshire [48 not out], before she was caught by Hattie Vincent off the bowling of Kate Sims.

Chasing 225 off 40 overs would always be a tall order for the young Korus’ side, who were missing their Central Hinds’ players, Melissa Hansen, Monique Rees, and Georgia Atkinson.

However, the Sims twins, Gemma and Kate, got them off to a flying start, taking the score through to 55 in the 12th over before Gemma was run out for 19.

After the loss of Kayarna Jones-Dennes, with the score at 71, the Korus lost their way, being dismissed for a disappointing 111 in 27.5 overs.

The Korus struggled against spinner Marjorie Kirby and promising medium pacer Aniela Apperley, who claimed seven wickets between them.

Kirby finished with 4-10 off four overs, while Apperley picked up 3-6 off five miserly overs.

“Kelly didn’t give a chance, she hit the ball well, and it was almost a surprise when she was out,” he said.

“We started off okay batting and were 70-1 off 17 overs but then we got bogged down, we weren’t rotating the strike, and we started hitting across the line and there were two silly runouts.”

Roseingrave said the team struggled with injury and illness, with one player vomiting in the very hot conditions.

However, he was full of praise for Kate Sims.

“Kate had her best game for the Korus. She batted fantastically and bowled really well. It was an outstanding effort,” he said.

With one round to play in the competition, on January 26 against Whanganui, the loss ended any chance of the Korus winning the trophy.