Hats off to Harcourts Competition needs to be restructured

Has there been a better team in local sport this century than Harcourts?

I would doubt it very much. So, let’s look at the facts.

Since 2000 Harcourts, or Collegiate as they were previously known, have won 14 of the 20 championships played, and have contested at least 16 finals.

In one of those years that they didn’t make the final [2009], Harcourts easily won the first round but proceeded to play the second part of the season in a Wellington regional league.

The only other teams to win the championship have been Celtic [or Celtic Marist], with three titles, and St Matthew’s, Wairarapa College, and the defunct All Blacks Bloomfields, with one title each.

Nine of Harcourts’ victories have come in a remarkable run of 10 consecutive final appearances starting in 2010. The latest win – a 41-37 defeat of Wairarapa College – was last Saturday.

One of the stars of Harcourts’ amazing run of success has been midcourt player Sarah Watson who first played for the team in 2001. 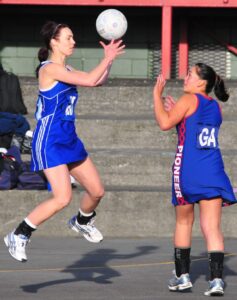 Sarah Watson wins the ball in the 2014 final.

Watson is one of three players to have played in most of the team’s victories.

“I was there for 2001. Then I went to university and came back after three years, and I missed a couple of years having babies,” Watson said.

Others are player-coach Geraldine ‘Hubba’ Carroll, who joined the Collegiate club in 1997, and Katie Alsop, who Watson reckoned made her debut in 2006.

Watson put a lot of the club’s success down to Carroll.

“We’ve had a really good core of players but a lot of it is down to Hubba.

“She is really good at identifying and bringing in the younger players and then concentrating on developing their skills.”

Watson is uncertain how long she will continue playing.

“I’ve been struggling with injury and sickness, so I might make next year my last year. I’m getting a bit old.”

It’s hard to find any comparisons of Harcourts’ dominance in the other major codes.

In club rugby, Gladstone have won five championships, and Greytown and Eketahuna have won four titles each this century.

Of the other winter sports, the main hockey and football teams play in the Wellington or Central League competitions, and secondary competitions are played in Wairarapa.

Greytown, Red Star, and Lansdowne have all won their share of premier cricket championships, but none have dominated for long periods.

Regardless of their success, none come within a bull’s roar of Harcourts’ achievements.

Of course, successful teams such as Harcourts always have their knockers.

“They only target the best players”, “they’re too competitive”, “it’s boring – they win too much”.

There’s a simple reason for their success – hard work.

So instead of knocking down another tall poppy let’s celebrate Harcourts’ remarkable success over 20 years.

Also, on the topic of the premier championship, are our top netballers being undersold?

Unlike other winter codes which kick off in late March or early April, netball does not get under way until May. Grading games take place in the first couple of weeks, then the first round is interrupted by Queen’s Birthday Weekend. There is another two-week break for the mid-winter school holidays.

This year, eight teams played a round of seven games before splitting into a top four and bottom four.

There was nothing cut-throat about those two groups of four. All the teams did was jockey for seeding for the semifinals which they were guaranteed to play in.

Twelve games were the lot for our netballers.

I know the secondary school sides are an important element in the open competitions and school holidays impact significantly on the season.

But surely a start in early April with the grading matches is manageable. When the teams return from the holiday break, they can hook straight into the serious competition.

That way, an eight-team competition could consist of two full rounds, semifinals and a final.