‘Hands Around the Hospital’ – 30 years on George Groombridge [left] and Garry Daniell reminiscing about the protest and its results on the 21st anniversary [February 2012] of the day Wairarapa joined forces to save our hospitals.

“What happens if no one turns up?”

That was the niggling question Masterton protest organisers George Groombridge and Garry Daniell never dared to ask out loud, although they had decided if only a small number turned up, they would simply go hand in hand, around the chapel, adjacent to the main Masterton Hospital building.

But turn up, they did.

The swing bridge across the Waipoua River in Queen Elizabeth Park became dangerously overloaded with people and numbers had to be limited.

Police, who had originally thought they would direct traffic into neat parking, gave up and parked cars haphazardly filled the roads.

About 40 kilometres down the road in Greytown, there was similar mayhem.

More than 6000 people were encircling their hospital in Greytown in a parallel campaign led by the hospital’s principal nurse Bill Graham and health advocate Judy Lee.

Masterton Hospital buildings were encircled three times and the smaller Greytown Hospital was enveloped six times by people standing hand-in-hand in mutual protest at the thought of losing their medical hubs.

It was a joyful, uplifting and determined affair in both towns; a coming together of a community concerned for the future of its health service.

The holding hands in solidarity to create a human chain was an idea conjured up by Masterton businessman, Garry Daniell a few months earlier.

His grandfather Fred and his uncle Trevor had both been architects to the Wairarapa Hospital Board and he felt especially linked.

In December 1990, the trustees of the Masterton Trust Lands Trust and Masterton councillors were celebrating the year’s end at the Trust House premises in Russell St.

Dr Owen Prior arrived late having returned from an Area Health Board meeting in Wellington.

Eventually, he was asked to address the gathering and he revealed there were plans afoot to centralise hospital functions in the major cities and so the two Wairarapa hospitals would most likely close, except for minor ailments.

Any major surgery or treatment would be offered in Lower Hutt, Wellington, or Palmerston North.

The confirmation of people’s worst fears was met with horror and there was much debate as to what could be done.

Garry Daniell set about writing his concerns down in a newsletter to his Mitre 10 customers.

His old friend George Groombridge read the newsletter and never backward at coming forward, marched immediately to Daniell’s store to discuss what action they should take.

The protest caught the imagination of media and locally the two men’s proposals were advertised enthusiastically.

A Wairarapa Health Action Group was set up was chaired by former Masterton Mayor Frank Cody.

Anyone with an ounce of civic pride and concern for their community were rattled by the proposed health changes as it was now being described by bureaucrats in Wellington.

The Wairarapa Hospital Board had been dissolved the year before in 1989 and Wairarapa was under the brand-new Wellington Area Health Board.

The Minister of Health Simon Upton and the board’s chief executive Karen Poutasi were “rationalising” public health, according to news reports.

Bob Henare was the chairman of the newly established Wellington Area Health Board.

He knew Wellington health services had a serious debt problem and it was hoped the joining of the various old boards would alleviate the problem by more “resource sharing”.

“Savings had to be made”, it was purported in many documents, which went across the Wellington Area Health Board table. 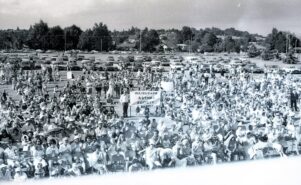 But the Wairarapa population was not having a bar of it, especially if it meant losing their hospitals.

But they were going to need all the help they could get from the community.

From that initial meeting with Daniell and Groombridge, there was a consensus that any sort of protest action needed total support from the doctors and hospital management.

The two MPs, Wyatt Creech for Wairarapa and John Falloon for Pahiatua, had pledged support.

Death of the hospitals

In Groombridge’s words, it took “creative lobbying of the doctors”, but on Christmas Eve 1990, a full-page advert in the Wairarapa Times-Age, headed “The death of Wairarapa hospitals could mean the death of you or your family” was signed off by every doctor in Wairarapa – all 34 of them.

Dr Richard Skelley, the Medical Superintendent of Masterton Hospital at the time, led the charge in getting the doctors’ support.

Despite Skelley’s failing health, Groombridge said it was Skelley’s expertise and knowledge of the Wellington bureaucratic system that greatly helped them.

Both Skelley and the head of nursing Miss Anderson confirmed the worst fears that both Masterton and Greytown hospitals were under threat of closure, or downgrading.

“The thought of no hospitals in Wairarapa was unthinkable,” retired social worker Groombridge said. Born and bred in Masterton and staunch community workers, he and his wife Shirley still live in the house they built when they married in 1949.

“The uniqueness of Wairarapa’s geographically enclosed situation, with its valley floor surrounded by mountains and rugged hill country, and its far-flung rural population, was completely lost on the Wellington bureaucrats,” he said.

“They would be happy to have us trawl over the Remutaka Hill road in ambulances or wait for emergency helicopters to hopefully get us to medical help. It was simply not feasible. Masterton Hospital would have become a sticking plaster place.”

Daniell, also Wairarapa born and bred and from an industrious pioneering family, could not imagine Masterton without a hospital.

Then, when it was discovered in early 1990 that $1.2 million, saved by the Masterton Hospital for introducing an IT programme, had been channelled into operations in Wellington, rumoured to have paid staff salaries, all hell broke loose again.

How come the good financial management of Masterton Hospital was propping up the debt-ridden Wellington hospitals? It was parochialism at its best.

A petition calling for the retention of the hospitals and stating that Wairarapa wanted to run its own health services was opened on Christmas Eve 1990.

It began in the Masterton store ‘Star Pets’ run by Hazel Crombie. Within a fortnight, it was in more than 30 outlets around Wairarapa, rapidly gathering signatures.

When it eventually reached Parliament, it had attracted 22,332 signatures. 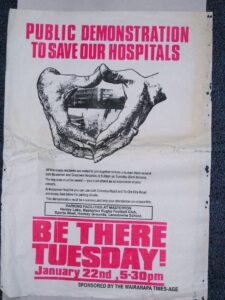 The petition was taken to the steps of Parliament in Wellington on February 26, 1991 by a posse, 1000 strong, who travelled the 100km from Masterton in a special train decked out in protest banners.

People happily paid the $10 a seat which included a lunch.

Schools allowed pupils time off to go to Wellington and workplaces had allowed staff to bank hours, so they could take part.

“While Wellington schemes, Wairarapa suffers” and “Health before Wealth” read the banners carried to the steps of Parliament.

The stream of people poured out of the Wellington Railway Station just after noon, causing lunchtime traffic to come to an abrupt halt.

They were joined by a further 1000 Wairarapa people who had travelled by car or bus to join the throng of protesters already camped in the Parliament grounds. The petition was presented to the MPs Wyatt Creech and John Falloon.

Frank Cody, as the Wairarapa Health Action Committee chairman, told the MPs they were not only representing Wairarapa people, but all rural New Zealand.

“This issue is driven by Wellington Area Health Board’s huge debt which has been imposed by the government. We do not seek to amalgamate with Wellington. We are capable of running our own affairs.”

Daniell told the crowd: “The issue is now firmly in the hands of the politicians We are looking to them to take the lead, but we will be waiting in the wings and will be ready to mount another campaign, if no action is evident in a short time.”

Creech announced that the massive turnout at the Hands Around the Hospital events and the march on Parliament gave them great strength to push the issue in government.

Creech presented the petition to Parliament at 2pm that day.

The pledge on the Wairarapa petition read: “That the government take all necessary action to maintain and protect the current level of health service provision in the Wairarapa, including the continued operation of secondary level hospital services within the region.”

The success was short-lived and Greytown Hospital closed in 1995.

The new Wairarapa Hospital, at the same campus as Masterton Hospital, was built in 2005.

Land Information New Zealand [LINZ] took over management of the old Masterton Hospital site in 2016 when it entered the Treaty Settlements Landbank, which LINZ managed.