A two-month extension to public transport fares and the 25-cent fuel tax freeze were part of yesterday’s Budget 2022 announcement, but funding for new Wairarapa trains was absent.

The half-price period would be extended until August 2022, and the economic situation would be reviewed closer to the time to consider a further extension. For holders of a community services card, the extension to half-price fares was extended indefinitely.

A spokesperson for Work and Income said there were more than one million community services card recipients in the 2020-2021 year.

“To give everyone certainty for an additional two months will be a welcome move.

“This budget comes in a time of economic uncertainty, and we need to be balanced, but it shows where we will be heading when economic certainty returns.”

When asked why funding for Wairarapa trains could not be secured this year, McAnulty said the Government had priorities elsewhere, but he would continue to push for it in the future.

“We need to be balanced. We are in a really enviable position at the moment compared to our major trading partners, and we as a government need to ensure we don’t increase inflation.

“I will continue to push for [new trains]. The Wairarapa line is still being upgraded, and we can’t have increased services until those upgrades are completed, so I think we still have a bit of time on our hands.” 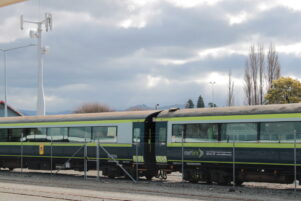 Thursday’s Budget did not include money for replacement trains on the Wairarapa line. PHOTO/FILE

Adrienne Staples, Wairarapa’s representative to Greater Wellington Regional Council, said she was disappointed the Budget did not include money for replacement trains on the Wairarapa line but still hoped to secure it in the future.

“We don’t get the feeling it’s dead in the water,” she said.

“The Government had other priorities in this Budget, but we will keep pushing.

“The trains that we have over here are about 50 years old and have been refurbished three times. They’ve probably got five years left in them.

“We can’t keep giving mid-life upgrades to an old train set. We will have to work with the government to assure the money is forthcoming so we can keep moving forward with things such as tenders.”

Commuters in Masterton were happy with the announcement of the extended half-price fares.

Celeste, who caught the bus from Martinborough to Masterton for work, said she was “encouraged” to catch the bus while petrol prices were high.

“If we’re thinking about cost-effectiveness, it’s better to catch the bus,” she said.

A second commuter said he was surprised.

“I was quite stunned; I wouldn’t have expected it.”

One person said they would welcome the new Wairarapa trains and were disappointed the funding had not arrived.

“If you catch the train [to Wellington] in the morning, you’re stuck down there,” she said.

“If there was a regular train, I’d go. I’ve been over the hill on the double-decker bus once, and that was enough for me.”