A Kune Kune pig gets lost in backyard in Featherston. PHOTOS/SUPPLIED

News of missing pets is not uncommon within Wairarapa, with reports of stray animals posted across the region’s social media pages regularly.

But Featherston man Tom Broadhead got quite the surprise when he discovered a Kune Kune pig having a snuffle about his backyard last weekend.

“My wife and I were sitting in the lounge. Then out of nowhere, we both looked at each other and said at the same time, ‘[what the heck], there’s a pig outside,’” Broadhead said.

According to Broadhead, the hog was enormous, with its shoulder easily passing his knee.

He immediately knew it was a domestic pig as it was friendly, calm, and placid.

He was not sure where the pig had wandered from, although he knew of a home down the road that had many animals on it.

Broadhead took to social media to see if anyone had lost a pig. No one claimed the pig, although it drew many laughing emojis and hilarious comments on what to do to it.

With Broadhead responding, “Breakfast is served”. 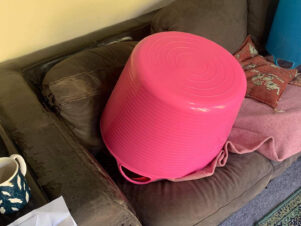 Hattie Broadhead takes defensive action hiding from the pig that wandered on to her family home.

Although Broadhead saw the funny side of the situation, daughter Hattie, 5, was quite the opposite declaring the swine, a “bad pig”. hiding under a basket as she thought it was going to make its way inside.

It’s not the first time a stray animal has strolled on to Broadhead’s yard with dogs, cats, and even sheep visiting his household.

“We’ve lived here 16 years now, and it’s not the first time we’ve been visited, but first by a pig.

In the end, it was more like, ‘oh look, there’s a pig in our backyard. It’s another day in Featherston,” Broadhead said.

Eventually, Broadhead left the pig to find its way home but said whoever found it next would discover a pig on a high.

“We just decided to let it do its own thing. It found its way in, so it was going to find its way out,” he said.

“It managed to find half a bag of espresso coffee grounds, so wherever it was going next, it was going to be in a very excited mood. It eventually wandered off down out of our gateway as I could hear my neighbour shooing it off his lawn.

Broadhead initially didn’t know where the pig finally ended up but said he saw a photo of it in the back of a ute, so he guessed its owner had found it.

The South Wairarapa District Council said from July 1, 2020, they had received 74 calls about wandering or lost dogs.

There were also 22 calls about other animals that had escaped, including cattle, sheep, pigs, horses, and a donkey.

Of the 74 dogs reported, 71 were claimed or found by their owner, while three were rehomed. All the other animals were either claimed by their owner or put into a paddock for their owner to retrieve.

District council environmental services manager Rick Mead said the council had Animal Control Bylaws Officers on call 24/7 to help with containment of dogs or other animals loose on public or private land.