Guardians of our precious land and wildlife New and improved Powell Hut in the Tararua Ranges. PHOTOS/SUPPLIED

The Department of Conservation Wairarapa district office is based in Masterton and led by operations manager Kathy Houkamau.

The Wairarapa DOC team is made up of 21 permanent and part time staff across three teams – biodiversity, recreation/historic, and community.

The district covers over 16,000 square kilometres with boundaries encompassing the South Wairarapa coast, the entirety of the Tararua Forest Park and reaching as far north as Norsewood.

During 2019, the Wairarapa team were involved in a range of work, including habitat restoration, predator and pest plant control, maintaining visitor assets and heritage sites, supporting community conservation and education efforts, as well as treaty settlement implementation.

Here are some of their 2019 highlights.

Sea Week is an annual event led by the New Zealand Association for Environmental Education and supported by DOC.

This year’s theme was ‘Tiakina o Tātou Moana – Care for our Seas’, which highlighted the impact of plastic, litter and other pollutants on our coasts and seas.

The Pūkaha National Wildlife Centre board invited Minister Sage to give the keynote address at the Love Pūkaha fundraising dinner at the Copthorne Hotel.

While she was in Wairarapa she visited sites including the Pou Aruhe Saltmarsh Freshwater Initiative near Lake Ōnoke where she did some planting alongside Ngāti Kahungunu ki Wairarapa environmental manager Rawiri Smith. 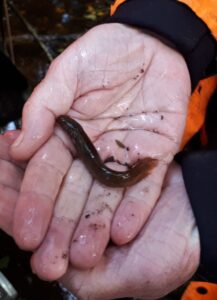 Mudfish are amazing creatures that are able to survive without water through a process called aestivation. However, they are listed as a ‘declining species’ due to loss of habitat through wetland drainage, land clearance and modification of streams.

We know there is a population at Lowes Bush so the biodiversity team monitors them once a year.

Powell Hut is the most popular hut in Tararua Forest Park with over 3000 bed-nights a year.

In July it was reopened with a small ceremony after a rebuild with four separate bunk rooms as opposed to one large sleeping area, with 32 bunks.

The deck size was tripled to allow more visitors to experience the panoramic view. Located just above the bushline, the stunning vistas are a fitting reward for those who complete the 1200-metre climb through the surrounding native beech forest.

Powell Hut is one of the overnight stays on the Powell-Jumbo Circuit, which is a popular three-day walk. The original Powell Hut was built in 1939 by the Hutt Valley Tramping Club. 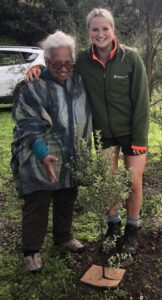 The district team has worked with various organisations across Wairarapa, including whānau, hapū and iwi, district and regional councils, schools and community groups to restore a range of environments.

We often provide plants to put in the ground and a barbecue to sustain the troops.

We are in the envious position of having too many groups to name but rest assured they are doing amazing work across the Wairarapa district.

Both treaty settlements contain cultural redress, much of which are public conservation land.

DOC, under Section 4 of the Conservation Act 1987, are obligated to give effect to the principles of the Treaty of Waitangi. 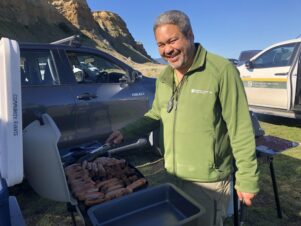 To enhance relationships with our treaty partners and improve cultural competency within our team, we visited Hurunui o Rangi marae outside Carterton.

We learned from the whānau about their place and their kaitiakitanga aspirations, particularly in relation to Uhi Mānuka (Carter’s Scenic Reserve) which holds great significance for them.

Conservation Week was launched by the New Zealand Scout Association in 1969 so last year we celebrated 50 years of the event.

It was only fitting to attempt our biggest ever Conservation Week effort and we were successful in organising this with support from Rangitāne o Wairarapa, Ngāti Kahungunu o Wairarapa, Greater Wellington Regional Council, Masterton District Council, Pūkaha, and Enviroschools. 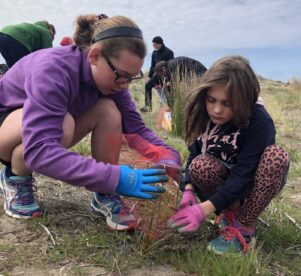 We set up a stall at the Māori Women’s Welfare League annual conference that was held in the War Memorial Stadium in Masterton.

Hundreds of delegates attended from around the country and it was a great opportunity for DOC to engage with whānau and talk about conservation and conservation careers.

Predator Free 2050 was a major theme and is something everyone can get behind.

The taxidermied animals – native and introduced – were a point of interest for young and old alike.

We set up a station giving out rongoā (Māori medicine) in the form of kawakawa and karamu tea.

It was also a way to connect to concepts such as kaitiakitanga and being able to sustainably interact with our environment for our own well-being.

This also adds another layer to why we look after our environment – because it looks after us.

We would like to thank our friends at GWRC and Pūkaha for their support with the event.