Greytown too good for Pioneer Former All Black Zac Guildford admitted to being a bit rusty in his first game for Greytown since he was nine years old.

Guildford played the full 80 minutes in Greytown’s 43-8 victory over a determined Pioneer at Greytown, and said he was excited to get on the paddock and play some rugby.

“I’m not the player I once was, but I love getting out there and testing myself, and it’s good for the mindset to have something to concentrate on outside of life and work.”

The 32-year-old had a relatively quiet game at centre but did get on the scoresheet in the second half, when he finished off a long-distance try with a 20m sprint to the line.

“My hamstrings weren’t liking that 20m dash, I think I have a bit more training to do,” he said.

As for his Greytown’s team performance, Guildford said the win was satisfying but there’s a lot more to come from one of the competition favourites.

“We’ve been training for six weeks now and to get out there and play a game, I think we were probably 20 or 30 points better than what we showed today, which was a little bit frustrating, but we know we have heaps of growth there.

“There were lots of errors, dropped ball; it wasn’t by one person, by everyone. I think I dropped a couple of balls and missed a few tackles, but there’s plenty of room for improvement, which is exciting.”

Guildford was also impressed by what he saw from Pioneer.

“They showed heaps of guts. They didn’t know they were going to have a team and for them to come here and fight for 80 minutes is full credit to them. I thought they showed lots of spirit and if they can grow on that, they can compete with the best.”

The foundation for Greytown’s victory was dominance in the tight five, especially at scrum time, where props Lewis Bush and the vastly experienced Tolu Fahamokioa had the Pioneer front row in all sorts of trouble.

That dominance led to the home side’s first try, when usual prop Chris Hemi, playing at No 8 fed halfback Taylor Fenwick to cross wide out after 10 minutes.

Bush and Hemi also dotted down to give Greytown a 17-3 lead at halftime.

Greytown added a four further tries in the second half to lock Rihi Brown, winger Cheyenne Harmon [2], and Guilford. 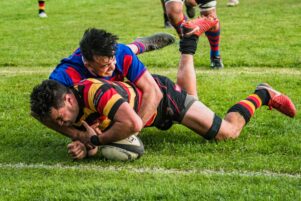 Tavita Isaac loses the ball in diving for a try.

Captain Tevita Isaac should have also scored, and it would have been a cracker. After running 50m from a scrum the loose forward lost control of the ball in diving for the try.

Pioneer finally crossed the line in the final minute when No 8 Conan Gray-Harmon intercepted a pass on the22m and trotted in for the try.

Eketahuna kicked off the season at home on Friday night with a hard-fought 16-5 win over Gladstone to lift the Duck Shooters’ Trophy.

The home team took an early with two penalties through the boot of first-five Josh Pepperell, only for Gladstone loose forward Eddie Cranston to score a try and close the gap to one
point at the break.

Gladstone had the ascendancy early in the second half, dominating possession and territory, only to be denied by outstanding Eketahuna defence.

When the home team did get the ball, they took full advantage with fleet-footed midfielder Matt Raleigh crossing for his first try for the club.

Martinborough ran away in the final quarter to post a convincing 45-22 win over East Coast at Whareama.

The Coasties dominated the breakdown but failed to make full use of the possession they had. Martinborough were far more effective and used their extra pace and skill in the backs in the last 20 minutes to bag a valuable bonus point victory in an open free-flowing game.

Carterton put this game to bed in the first half at Carterton.

The home side crossed for four tries in the first 40 minutes, and a 27-0 halftime lead over Marist, who looked a shadow of the side that won last year’s championship.

Marist did fight back with the only try of the second half, but the damage had been done in a destructive first half by the home team.

Masterton Red Star kicked off the championship with a 48-0 win over Gladstone under lights at Trust House Memorial Park on Friday. Tuhirangi won a tight tussle with Carterton 41-31, Greytown thrashed Pioneer 64-10, and East Coast won by default from Martinborough.