Greytown identified as a high-growth area

Greytown School pupils were the first to learn of a new $164 million government package for schools, unveiled on Thursday.

Education Minister Chris Hipkins announced the package – which includes funding for school developments and expansions – at 11am on Thursday in Greytown School’s hall.

This money would go towards the demolition and reconstruction of a 100-year-old five-classroom block. 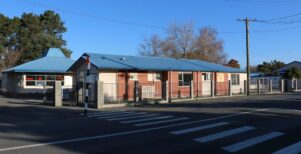 Another four classrooms would also be built.

$132 million of the overall package was allocated to North Island schools, with $32 million for the South Island.

The funding makes up part of the $1.2 billion allocated to expansion and growth in Labour’s 2019 budget.

Hipkins said the package for schools was evidence of Labour’s commitment to the creation of infrastructure for public services.

Greytown School pupils welcomed Hipkins, Wairarapa MP Kieran McAnulty, and members of the board of trustees into the hall with a haka.

Another pupil had asked if Hipkins’ visit meant the school had covid-19.

“You all look pretty healthy from up here where I’m standing,” Hipkins said.

“But we do have quite a few buildings that are not as healthy as we need them to be.”

Mouths dropped when Hipkins told pupils that some of their classrooms were more than 100 years old.

“That means they’re even older than me,” Hipkins said.

While the Ministry of Education made most decisions around funding allocations, McAnulty had been lobbying Hipkins for some time to improve the school’s buildings.

Greytown had been identified as a high-growth area and faced a risk of overcrowding at schools.

“We’re trying to get ahead of that curve,” Hipkins said.

Hipkins would not make public any other schools in Wairarapa that had been identified for future funding, but McAnulty pointed to Fernridge School as having a comparable rate of growth.

“You never know – you might end up doing that job one day,” he said in a nod to Labour’s Apprenticeship Boost scheme.

Under the scheme, employers receive payments to help them keep and take on new apprentices.

Hipkins said that the school projects constituted a key part of New Zealand’s economic recovery from covid-19 because they would help to create jobs up and down the country.

Construction companies would receive a steady flow of work from such jobs, which would encourage them to hire and train new employees and apprentices.

Until recently, a lack of expertise in school development had been one of the government’s biggest constraints. Hipkins said it was unfair to give a school money without consistent support throughout a project.

But the government had now improved its ability to help schools with redevelopment projects, he said.

In 2019, Labour started a reform of the Tomorrow’s Schools system implemented in 1989.

This system had introduced parental-elected boards of trustees to schools, giving parents more influence over their children’s education.

Under Tomorrow’s Schools, boards of trustees had been responsible for the management of their own school property.

Now, Hipkins said, this responsibility would be transferred to the Ministry of Education.

“It’s served us well, but it’s past its use-by date,” Hipkins said of the old system.

He said the government was now able to make better use of data to target the nuanced needs of schools.

He expected the new Equity Index to replace the decile system in less than two years.

Asked about his personal experiences with school buildings, Hipkins said he was in Year 2 when his school, Waterloo Primary in Lower Hutt, burnt down completely.

“It was quite an exciting thing for a kid, seeing your school completely rebuilt.”

But Hipkins reminded pupils that while buildings were important, a good attitude was the most important thing for their learning.

“Read all the books. Listen to your teachers. Learn as much as you can – because this is a fantastic opportunity for all of you.”